Lender embarks on most radical strategic overhaul in two decades 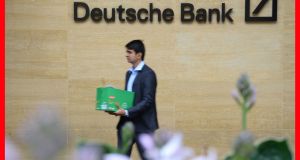 Deutsche Bank’s 750-strong workforce in Ireland are set to escape the worst of a global staff cull after the embattled German bank moved on Sunday to unveil its biggest restructuring plan in two decades to turn around its business, according to sources.

Drawing a line under a 20-year attempt to break into the top ranks of Wall Street, chief executive Christian Sewing has moved to shut Deutsche Bank’s loss-making equities trading business and shrink its bond and rates trading operations significantly.

The banking giant started cutting a targeted 18,000 jobs – or 20 per cent of its global workforce – within hours of the announcement, with whole teams of equity traders in Europe, the US and Asia being dismissed on Monday morning.

A source familiar with plans for the Irish operation, which employs 750 people, said that while there will be job cuts in Ireland, they will be “minimal”. The source did not give further details. If the 20 per cent global cull were applied on a pro rata basis, it would have equated to 150 job losses in Dublin.

A spokeswoman for the bank said that it is “not disclosing the headcount reductions split by regions”. The investment bank’s trading operations will be hardest hit, with its offices in London and New York bearing the brunt.

Deutsche Bank, founded in 1870, has been in Ireland since 1991, mainly in the area of global transactions banking (GTB), which covers cash management, trade finance, treasury, trust and securities services for global customers. The number of employees in Dublin has more than doubled in the past five years as it expanded its GTB and global technology and operations hubs in Ireland.

Mr Sewing told reporters on a call on Monday morning that the job cuts “have been the most difficult and painful part of our decision making” as “people and their fates are very important to us”, adding that the bank needs to be honest with itself and “say where we are strong and where we are not”.

The lender expects restructuring charges of €7.4 billion through 2022 to pay for the radical overhaul and will shelve the dividend this year and next.

The new strategy signals a retreat from Deutsche Bank’s’s global ambitions and its aim to be Europe’s main rival to Goldman Sachs. One year ahead of the lender’s 150th anniversary, Mr Sewing is refocusing the lender on its historic foundations - financing German and European corporate clients and domestic retail banking.

What was once Europe’s dominant financial institution was virtually out of options after the collapse of merger talks with Commerzbank in April and the failure of incremental reforms in recent years.

Without naming any individuals, Mr Sewing harshly criticised his predecessors at the top of Deutsche Bank on the call with journalists. He accusing them of creating a “culture of poor capital allocation” and chasing revenue for the sake of revenue.

He promised that this would end with the new strategy, as the bank “will only operate where we are competitive”.

Deutsche will create a new bad bank - dubbed a “capital release unit” - comprising €74 billion of risk-weighted assets. The lender expects to finance the €7.4 billion of restructuring costs without a capital increase, helped by lowering its minimum capital levels and suspending its dividend for two years.

It also hopes that asset disposals will allow it to return €5 billion to shareholders either via special dividends or share buybacks from 2022.