A 100% chance of recession: what do economists think 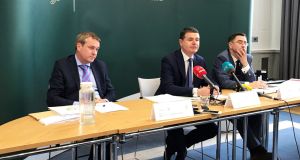 Economists here broadly agree that a reversal of some sort for the Irish economy is inevitable but differ on what might cause it or how severe it is likely to be.

They were responding to a claim by the head of the National Treasury Management Agency (NTMA) Conor O’Kelly that the chances of a future recession in Ireland are 100 per cent.

“100 per cent is probably overstating it but the risks are clearly elevated that there will be another downturn over the next few years, mainly because of Brexit, increasing global trade tensions and of course the law of averages that the boom period in the US will come to an end soon,” economist Alan McQuaid said.

He said the current expansion in the US, which has extended for 121 months, is the longest in the post-war era and about twice the length of the normal expansion period.

“The old adage still applies that if the US sneezes the rest of the world catches a cold, and with Ireland one of the most open economies in the world, it is at greater risk from global trade tensions,” Mr McQuaid said, noting the shift away from globalisation back to an era of protectionism was bad news for Ireland.

Chairman of the Irish Fiscal Advisory Council Séamus Coffey said: “In simple terms, he [ Conor O’Kelly] is right. There will be another recession in Ireland but, of course, when that will be remains an unknown.”

“In the near term it seems likely that the Irish economy will slow down. The high growth rates of recent years can’t be maintained forever. This could be a gradual slowdown or a much more marked slowdown brought about by an event such as a hard Brexit,” he said. “Because this will happen at some stage we should be using the positive economic situation we currently find ourselves to reduce potential risk factors. Unsurprisingly, the NTMA sees the €205 billion national debt as being one of those risk factors,” Mr Coffey said.

KBC Bank economist Austin Hughes also agrees that some sort of downturn is inevitable but said focusing on it was misplaced.

“ At some point we will see a downturn but it would be wrong to focus all our energies on that eventuality and not focus on policies to make the expansion stronger and more sustainable in the interim,” he said.

Mr Hughes said with Government borrowing costs so low – the 10-year yield on Irish Government debt fell to a record low 0.03 per cent this week – the Government should be able to do more than prioritise paying down debt.

“If we can put assets that improve Ireland’s economic outlook on the other side of the balance sheet to that debt, we will have a much stronger economy that will be much better able to weather economic downturns,” he said.

“The debate should be mature enough to countenance what spending/tax measures add value. If all we can do in the current environment is pay down debt, it suggests we have no concept of how to deal with issues such as housing, health, education inequality any one of which could make the next downturn much more severe,” he said.

At the Public Accounts Committee on Thursday, Mr O’Kelly said as Ireland is a small, open economy, highly-indebted, and relying on international investors for 90 per cent of its borrowings, the chances of a another recession were 100 per cent.

Fergal O’Brien of employers’ group Ibec said it was inevitable that a globalised economy such as Ireland’s will experience ongoing economic volatility and is more vulnerable that many other economies to global economic shocks.

“The ‘Great Moderation’ of the 1990s and early to mid 2000s came to a shuddering halt with the global financial crisis and it is likely that Ireland will be impacted by other global shocks over the coming years and decades,” he said.

“ The best way to protect ourselves against such shocks is to effectively manage our debt burden and to target public spending at investment oriented measures such as infrastructure, innovation and education which will drive productivity and support competitiveness, which is particularly relevant in times of global economic volatility,” he said.

France issues ‘clear and final no’ over Carrefour takeover bid 16:11
General Electric accuses Siemens Energy of stealing trade secrets 16:07
Time for Malin to decide what it wants to be when it grows up 15:56
Pfizer to reduce vaccine deliveries to Europe 16:21
Flights in State’s airspace collapse to 1980s levels 15:34