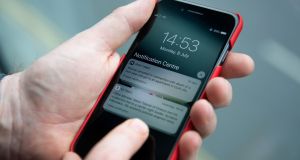 Research by a DCU academic found RTÉ was the most prolific user of push notifications among Irish media outlets. Photograph: Chris Maddaloni

In a media age when “reaching out” is cosy code for persistently requesting a comment, and “storytelling” is what some PR companies have taken to calling press releases there’s something admirably up-front about push notifications – those intrusive text-like messages that abruptly flash up on your smartphone’s lock screen and disappear just as fast.

Download the app of any media outlet from broadcasters such as BBC and Sky to all newspapers including The Irish Times and like most other apps, push notifications come, too. And where once they delivered old-school news flashes – a breaking major news event such as a natural disaster or the death of a world leader – now they are just as likely to flag a celebrity interview or a sporting triumph. And media trends show we are on track to get considerably more of these bite-size communications.

Their use, as measured by researchers at Columbia University working with the Guardian Mobile Innovation Lab, has grown dramatically. A study of 30 US media apps comparing push notification activity between 2017 and 2018 found that four outlets more than doubled the number of alerts they sent each week: The Wall Street Journal, NBC News, CBS News, and Reuters.

The WSJ was the most prolific sender, averaging 71.5 alerts per week and more than quadrupling its average from 2017. And so important have these micro media messages become as branding and reader engagement tools that The New York Times told the researchers that it was “a big moment for us as a newsroom to say: push is its own platform. It deserves to have all of the intention and critical thinking that the front page does, that the home page does”.

That’s quite the pressure on a text-only message that typically runs to about 130 characters. Most news apps have the technology to support so called “rich alerts” – notifications which include photographs – but few use them, mostly for reasons of speed. A digital journalist can push out an alert in seconds – hunting around for an appropriate photograph might take a minute and by then competing news outlets will have sent their alerts and no one wants to be last with the news.

Also, photographs in alerts as they appear on lock screens are so small they are likely to irritate more than inform.

Dr Dawn Wheatley, a former Irish Times journalist and now assistant professor at DCU’s School of Communications is in the early stages of a Europe-wide research project on how push notifications are used.

Looking at Irish and UK media and taking the period January 1st-March 31st this year she found that of the Irish media apps, RTÉ News Now was, by a small margin, the most prolific user sending 212 alerts, followed by The Irish Independent at 203, The Irish Times at 169 and The Journal at 37.

Of UK media studied, Sky was by a considerable margin the biggest user, sending 400 alerts, followed by the Guardian’s 59 and the surprisingly low number of 43 sent by BBC News.

There were time differences, too. All UK media sent alerts through the night with Irish ones beginning at 6am and ending at midnight – which is likely more a reflection of newsroom shift patterns than a consideration for sleeping readers.

Looking at the Irish figures, Wheatley says news outlets haven’t given a huge amount of thought to push notifications and “they’ve possibly not been used very strategically as a result.

But I think as news organisations continue to fight for their readers’ attention and engagement, they might realise that having this direct access to audiences’ lock screens – if only for a split second before they swipe it away, or click in – could be quite a powerful channel”.

There is though the fatigue factor. Too many alerts and people either mentally switch off or worse, from the news outlets point of view, physically go into their app settings and actually block future notifications.

And lock screens are cluttered spaces: Wheatley points out that these news alerts are appearing alongside so many others, including email, social media, and fitness apps.

“I think increased customisation options are one way that they [news outlets] could improve,” she says. “In general, among Irish and UK apps, there are few ways to tweak the subject matter that you get notified about. This all-or-nothing approach can work for some people, who like getting a little bit of sport, politics, breaking news etc, but it doesn’t suit everyone, especially if they have multiple apps sending very similar alerts about the same news events.”

Just as the final whistle blew on the Women’s World Cup on Sunday my lock screen lit up multiple times with notifications telling me the result – which was no news to me as I was watching the game, so that was mildly irritating – followed immediately by another barrage of alerts about the Greek elections which, while obviously newsworthy, felt like information I didn’t need right then and certainly didn’t make me feel the need to click through to any of the apps sending essentially the same message, to find out more.

That’s the challenge for news outlets using this micro media messaging – how to figure out ways to notify without being too pushy.

1 Basic income for all: Has the Covid crisis given us a new economic model?
2 ‘I don’t need to do any of this. . .I don’t actually need to work.’
3 Promontoria barred from pursuing doctor over Ulster Bank loan
4 Only way is up for Stripe as valuation skyrockets
5 Anti-alcohol zeal of public health experts peppers reopening debate
6 Brexit stumbling blocks persist as Barnier travels to London
7 Fiona Reddan: Who’s afraid of Revolut? Not AIB and BOI it seems
8 Online shoppers face unwelcome tax surprise
9 ‘Make plans but don’t hold on to them too seriously’
10 Pandemic brings a halt to Zara-owner’s Irish expansion
Real news has value SUBSCRIBE