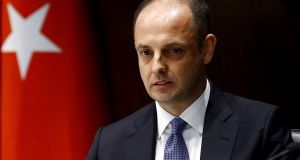 Turkish assets came under fire after President Recep Tayyip Erdogan dismissed the central bank governor, fuelling concern that monetary policy will be eased too quickly. Yet with rate cuts already priced in and local bonds offering high yields, the fallout has been relatively contained.

The currency was trading 1.8 per cent weaker against the dollar by 4.15pm in Istanbul, tracing back almost half the plunge posted earlier in the day. Its implied volatility, which was already the highest in the world, rose the most since early May. Istanbul’s main stock index suffered its biggest drop in almost a month on a closing basis.

The sell-off could have been worse if a dovish tilt among global central banks hadn’t made investors so desperate for returns, according to Paul McNamara, a London-based investment director at GAM Holding AG.

The nation’s local-currency 10-year debt yields 16.8 per cent, among the highest in emerging markets. Adjusted for inflation, Turkey’s policy rate last week climbed to the highest since at least 2011.

“Turkish fundamentals are in reasonably good shape, with the glaring exception of foreign-exchange reserves,” said McNamara. “With emerging markets doing well, I think the global climate is supportive.”

Erdogan stunned investors when he dismissed Murat Cetinkaya on Saturday, undermining the central bank’s independence weeks before it’s scheduled to decide on policy. Deputy governor Murat Uysal was named as a replacement.

After the decree came out, Erdogan told legislators from his ruling party that politicians and bureaucrats needed to get behind his conviction that higher interest rates cause inflation, according to an official who was present. He also threatened consequences for anyone who defies the government’s economic policies, the official said. The 65-year-old leader has said lower rates are needed to boost an economy that entered its first recession in a decade this year.

Cetinkaya’s “crime” was to refuse to cut rates, Win Thin, New York-based head of currency strategy at Brown Brothers Harriman wrote in a note. “We all know who really controls monetary policy now.”

Erdogan’s decision justified the stance of bears who have bet against the currency, in spite of its rally since early May through Friday.

Three-month risk-reversal contracts – the premium of options to sell the currency against the dollar over those to buy it – climbed to 5.7 percentage points, the highest level in the world. The lira’s implied volatility rose for the first time in 13 days, according to prices compiled by Bloomberg.

Babacan indicated that he would start a separate political movement to meet Turkey’s need for a fresh policies and strategy, according to an emailed statement on Monday.

The currency weakened to 5.7337 per dollar. The Borsa Istanbul 100 Index fell 1 per cent, with Turkiye Garanti Bankasi and Akbank contributing the most to the decline.

Cross-currency swaps – which gauge the market’s appetite for lira risk – held within their recent trading range below the 20 per cent mark. That means investors aren’t pricing in another policy blunder, although that risk isn’t off the table.

Before Cetinkaya’s dismissal, Bank of America Merrill Lynch forecast a rate cut of 100 basis points later this month. Anything more could go down badly with investors.

“The central bank will make a major policy mistake if it cuts rates by a few hundred basis points on July 25th,” Rabobank strategists, including London-based Piotr Matys and Hong Kong-based Michael Every, wrote in a report. – Bloomberg