Caveat: State and business dance to the same tune in a week filled with carefully curated craic 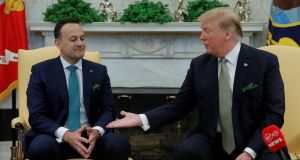 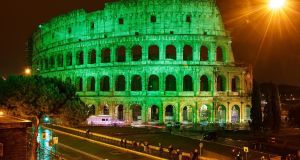 Global Greening: the Colosseum in Rome

The one-man brand and US president, Donald Trump, considers himself to be one of the world’s truly great marketers. He has a point. Think of all the nonsense he sold the US people during the 2016 election, and they bought it. Only an ethically unburdened, savant marketer could have sold that lot.

But even the world’s marketer-in-chief must have looked enviously at Leo Varadkar sauntering into the White House on Thursday, bearing a crystal bowl full of weeds, and thought to himself: How do they do it?

How do the Irish manage, in March year after year, to pull off one of the greatest branding coups on the planet, forcing Ireland and Irishness on to the agenda of almost every international media organisation worth tuning in to?

The Israelis, the Chinese, the Australians – they all have national celebrations and are adept at leveraging their international political and business networks to get their message across. But they’d all kill for the global exposure that Ireland gets around St Patrick’s Day.

In years past, this used to be considered a golden opportunity for the State to get its political message across to a global, chiefly US, audience... all against a cultural backdrop. It was a genuine celebration of Irishness. It is still that. But for the last decade in particular, the State’s business and commercial ecosystem has also latched on to St Patrick’s Day to an incredible extent.

That our national celebration is now viewed in establishment quarters chiefly as a means of selling Ireland abroad, rather than simply celebrating it, shows just how much the needs of trade and business have become hardwired to the occasion. Irish society considers itself decent and progressive. But green-in-tooth-and-claw capitalism is now also an undeniable part of the psyche.

Irish Ministers will be dispersed throughout the globe, and they’ll “green up” various landmarks across the world, but Trump’s US is naturally the main focus. Irish companies in the US employ 100,000 workers; US companies directly employ at least 150,000 over here.

There is a dizzying array of Irish business-themed dinners, lunches and other events taking place in the US this week, all with the express aim of selling the homeland as a place to do business. Everybody is in on it, chowing down for Ireland. The State and the business sector are symbiotic on weeks like this.

It is no surprise, for example, that Martin Shanahan, the chief executive of foreign investment agency IDA Ireland would be in the US this week, attending events in Boston, Washington and New York, and meeting potential investors. Among the State-allied-to-business events he attended was Science Foundation Ireland’s presentation of the St Patrick’s Day Science Medal to Mike Mahoney, the chief executive of Boston Scientific. It is a big employer here.

Enterprise Ireland also giddies up every year on this week, pushing the message of indigenous Irish exporters to buyers abroad. EI will hold 50 different events at 45 different locations worldwide, but it is instructive that its chief executive, Julie Sinnamon, is in the US all week, along with 110 of its client companies.

Among EI’s 20 US events this week are its “coast to coast fintech tour”, led by its chairman and the former KPMG managing partner, Terence O’Rourke. He was joined by Irish-owned companies in the sector such as Worldnet, Transfermate and Dermot Desmond’s Daon group.

It also held a business leadership round-table event in Washington, attended by Varadkar. The consul general in Boston hosted a Global Irish Business lunch at the beginning of the week, attended by EI clients such as Icon, Poppulo and Relatecare. US companies such as Wayfair, TripAdvisor and Microsoft were also there, lapping up the business craic.

The US Chamber in Commerce held a prominent St Patrick’s Day event. The American Chamber of Commerce in Ireland was another that was active. The Ireland Funds also invited all the business luminaries along to a philanthropy dinner.

There were even wigs on the green, and not in a bad way. Irish Chief Justice Frank Clarke was due to address a gathering in Washington of lawyers and business people on Friday about the push to establish Ireland as an international legal centre, post-Brexit. The attorney general, Séamus Woulfe, hosted the event, another sign of the State and the private sector donning the green jersey, hand in hand.

No other State promotes its economy around its national day to the extent that we do.

Promoting Irish business in the US doesn’t come cheap, however. The Ireland-US Council is a pro-business organisation run by prominent Irish-Americans, and it has had input in the past from this side of the Atlantic from natives such as former AIB director Michael Somers.

The council recently advertised tables for its St Patrick’s lunch on Friday in the Metropolitan Club in New York. At a cost of $15,000 (€13,275), companies could sign up for a “Crozier package”, including a table for 10, an ad on the menu, a shout-out from the podium and marketing materials placed around the room. For $20,000, they’d also throw in the chance to introduce a speaker.

There is no such thing as a free lunch, even for the Irish.

Tourism Ireland will “green up” global landmarks this week from Victoria Falls in Zambia, to Nation Towers in Abu Dhabi. It is the 10th anniversary of the Global Greening initiative, which has in the past seen iconic locations such as the leaning tower of Pisa and Sydney Opera House bathed in green light to celebrate St Patrick’s Day.

If you happen to notice the Convention Centre Dublin looking a little green around the gills this weekend, however, it is because Alltech has cottoned on to the craze, and has lit up the building for its three-day craft beer festival.

Hopefully nobody overindulges on the brews, or they’ll be green in the morning for altogether different reasons.

Picture of the week had to have been the one from Cheltenham of developer Sean Mulryan’s party of winners’ enclosure guests for City Island’s win on Wednesday. It was like a Celtic Tiger era version of Back to the Future.

Retailers on both sides of the Border were first out of the blocks on Wednesday night with a joint statement welcoming the “removal of no deal” from the list of Brexit options, following the House of Commons vote.

The statement from the South’s Retail Excellence and Retail NI in the North said no deal had now been “taken off the table”.

If only it were so simple. The only thing that can take no deal off the table, as many commentators have pointed out, is a deal. And there is no sign of one of those. Business shouldn’t let out a sigh of Brexit relief just yet.