When it comes to gender equality in the world of business, it’s good to talk

Caveat: As the only man on the panel, I quickly realised there was nothing to worry about 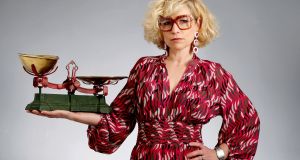 Designer and Dress for Success founder Sonya Lennon was among the other panellists. Photograph: Marc O’Sullivan

A calm, rational discussion can be a beautiful and enlightening thing.

On Tuesday, I took part in a panel debate about gender inequality in business, as part of a series of events held by the Irish chapter of Dress for Success, a charity that aims to improve the lot of women in the workplace. Feminism, in case you hadn’t noticed, has gone financial.

One can never be sure how these sort of events will go. Issues around feminism and inequality can inflame passions at the best of times. As the only man on the panel – Token Bloke – and one with an apparently natural ability to horrify women, I entered the arena wondering if I knew what I had signed up for at all.

As we took to the stage, my trepidation intensified when I looked at the audience. A room full of women interested in feminism stared back. Presumably, many had had negative experiences for which men are to blame. I’m a man, I thought. They’ll all blame me. This is hopeless. Where’s the fire exit?

Of course, as it turned out, I had nothing to be concerned about. The panel moderator, Jim Carroll of Banter, resisted the temptation to steer the debate into a clichéd gender war. The other panellists – designer and Dress for Success founder Sonya Lennon, Fianna Fáil Senator Lorraine Clifford-Lee, and PricewaterhouseCoopers accountant and equality activist Deborah Somorin – did likewise.

And contrary to my earlier fears, which were probably influenced in the first place by my invocation of a crude stereotype about cross feminists, the earnest audience resisted the temptation to eviscerate Token Bloke.

What was the result of all of this unexpected decorum and civility in a discussion on such a hot-button, emotive topic? Some of us learned something new. Everybody was heard and listened in return. Revolutionary.

Lennon explained that women in business tend to undervalue themselves, especially when it comes to salary negotiations. She recalled counselling a female friend who, at the time, was in money talks with an employer. Lennon told her to pick a number that she felt properly valued her worth.

The friend picked a modest number. Lennon rebuked her. The friend said she knew it was too low, but didn’t feel right asking for more. Men usually go into salary negotiations asking for a cricket score. Women don’t.

Clifford-Lee, who sits on a cross-party group on the topic, discussed the political machinations around attempts to legislate against aspects of workplace inequality. She talked about the push to change the law to allow fathers share equal portions of a birthing mother’s maternity leave. This could potentially spark a workplace and home revolution, if a significant uptake of birth leave by new fathers could be engineered.

Somorin spoke about issues of workplace inequality from a very personal perspective. She is of African heritage and, while a young teenager, she became homeless and had a child. Her route to PwC and a high-profile career in the world of finance did not take the path most worn. There were bespoke obstacles to scale, on top of the usual ones with which women in business are confronted.

Meanwhile, I chipped in where I could, sometimes with data or insights gained from the research of others. Remarkably, there wasn’t even any uproar when I highlighted that – contrary to the conventional wisdom that it gives businesses a bounce – adding women to a company’s board or management has a statistically zero effect on the performance of the business.

(It’s true, according to the latest academic research from the world’s top business schools such as Wharton. Don’t appoint senior women just because it’s profitable. Do it because it is fair, which is reason enough.)

The discussion was held on November 13th because that is when some women symbolically believe they begin working “for free” until the end of the year due to the lower average incomes of women compared with those of men.

Ah, the gender pay gap. If ever there was an issue with the potential to puncture decorum and civility, this is it.

Ireland, according to Eurostat, has a gender pay gap of 13.9 per cent in favour of men. That’s lower than the average gap in Europe, but still high enough to boil your proverbials if you are a woman who feels she isn’t getting what a similarly qualified man would get.

The trouble with the gender pay gap is that the concept sometimes represents different things to its proponents and its critics.

The pay gap is a measure of the difference in median average pay of men and of women across the workforce. It is influenced by a host of complex social, cultural and economic factors, such as the numbers of lower paid part-time workers in the workforce (usually women), career choices around childbirth, and traditional social strictures that sometimes turn those choices into imperatives.

Many people incorrectly assume the gender pay gap is a straightforward measure of pay discrimination, as if, all else being equal, a woman will be paid an average of 13.9 per cent less than a man for the same job.

This is not what the pay gap measures, yet many people hold it up triumphantly in gender-driven arguments as if it does. If you disagree, you’re a “denier”.

Meanwhile, ardent critics of the concept usually argue that workplace discrimination has been solved by laws and blithely dismiss the pay gap as a myth, on the basis that women’s median earnings are only lower because they choose to interrupt their career by having babies.

This, too, is not quite the unvarnished truth. A properly functioning economic system should be flexible enough to encourage mothers back into the workforce and not penalise them for having children.

The gender pay gap is neither the ultimate numerical proof that all men are on the make, nor proof that economic sexism is over. It is simply a measure of systemic inflexibility that all sides have an interest in addressing.

Valid points can come from any side. The most important thing is to make sure we all listen as well as talk.

– The uncertainty surrounding Brexit has queered the pitch for British companies operating in Ireland, and vice versa. British retailers operating in this State will be among hoping and praying the UK doesn’t crash out without a deal. The Republic is an important and lucrative market for many British retailers.

JD Sports, for example, last week filed financial statements for its 19 Irish stores that underlines why British retailers entered Ireland in the first place. Sales rose by more than 10 per cent in the year to the beginning of February, breaching €95 million. Profits held reasonably steady at €12.6 million.

The Irish operation, meanwhile, managed to cough up for a €15 million interim dividend to the parent group. The more sterling falls against the euro as the British continue to immolate themselves economically with Brexit, the more lucrative the Irish operations becomes for British retailers.

JD Sports, Debenhams, Sports Direct, M&S, Tesco, Arcadia, Next. there is no shortage of them here. If it is a hard Brexit with ridiculous tariffs that destroys their supply chains, where will they all be in one year’s time?

– When Leo Crawford, John Clohisey and John O’Donnell sold 80 per cent of Spar-owner BWG to a South African investor in 2014, they only received €55 million for the majority share and all of that went back into the business.

Almost five years and one amazing economic recovery later, the South African investor has valued the remaining 20 per cent, which it is obliged to start buying, at €75 million. That is some turnaround.

The BWG boys had plenty of economic good fortune along the way. But they made much of their own luck too. Enjoy the windfall, gents.