Atmosphere between Ross and tourism chiefs chillier than a white Christmas 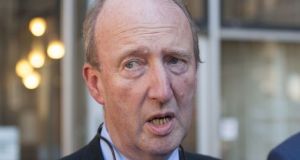 Shane Ross has become what he railed against in his days at the Sunday Independent: a minister who is determined to buy the public’s approval with their own money

A press release landed in media inboxes on Wednesday from the Department of Transport, Tourism and Sport, which is presided over by Minister Shane Ross.

“Ministers publish Tourism Action Plan 2019-2021,” promised the missive. It contained a hyperlink to the department’s website to access a copy of the plan. I clicked it. This brought up a page with another link. I clicked it, sat back, and smiled.

“Error... the page cannot be found,” flashed up on the screen. The link led to nothing. I tried again with the same result. I tried the link to the Irish version. Still nothing.

Is this some sort of an elaborate metaphor, I thought to myself? Does Ross really have no plan for tourism?

There was a tourism action plan, of course. The broken hyperlink was clearly just an administrative error. You could find the plan on the website if you ferreted around the publications section for a bit, and by Thursday the broken link was fixed.

What remains broken, however, is any sense of trust or rapport between Ross and the industry whose interests he is supposed to represent at Cabinet. Within the sector, he is the least popular occupier of his particular government seat in years.

Since he took office 2½ years ago, there has been a prevailing sense across the tourism industry, which employs about 260,000 people and generates close to €9 billion for the economy, that Ross knows little of the sector and cares even less.

Some of this really isn’t his fault. He has a monstrous department with a list of priorities that must be a mile long. The transport part of his portfolio is more than enough for one minister alone, with bus and rail strikes, major investment projects, road safety issues and our island nation’s air and sea access all within his remit.

The up-and-coming Kerry TD and Minister for State for Tourism, Brendan Griffin, is well regarded and he does a good job assisting Ross with his responsibilities. But tourism people are business people. And business people always prefer to deal with the big boss. That’s just how it is.

Given the complexity of issues involved, there really could be a senior Cabinet role dedicated solely to a sector the size of tourism. It’s not Ross’s fault that there isn’t one; it has been a failure of successive governments to grasp the idea.

Yet, a part of his problem with the sector is also down to the Minister’s own peculiar ways. He rubs people up the wrong way. Many who encountered Ross in his journalism days will say he is personable and witty. But he has always had a propensity for friction and a weakness for bombast.

It may be a virtue in government, but Ross has an ego the size of Croke Park. While ferreting around his department’s website for the elusive tourism plan, I happened upon a collection of his press releases. The headlines would make a Healy-Rae blush. Here’s one from last month’s cold snap: “Ross funds extra salt.”

What, all by himself? It makes it sound like he rummaged through his piggybank from his stockbroking days, and personally scraped together the cash for a lorryload of Saxa.

He has become what he railed against in his days at the Sunday Independent: a minister who is determined to buy the public’s approval with their own money.

His ego has led to problems with industry figures. The Irish Tourist Industry Confederation (Itic) is the umbrella body for the sector, whose membership includes everybody from airport authorities to hotel and pub groups. Ross has a famously cool relationship with it.

Itic’s chairman, for example, is Maurice Pratt, the former C&C chief executive. Ross used to eviscerate him in his journalism days. He used to regularly (and unfairly) refer to Pratt as a “waffler” and a “flop”. How must that play out when they meet up, as they surely must, to discuss the industry’s issues of the day?

In September, Itic heavily criticised the Government for its failure to put together a “fighting fund” for a sector among the most exposed to Brexit. Agriculture and enterprise got funds. Why not tourism, which is arguably more exposed? When invited to state its confidence in Ross, the confederation declined to give it.

Pratt went further: “Does tourism get the weight it deserves [in talks] around the Cabinet table? No, it does not.” Ross blew a gasket. He issued a terse statement dismissing Itic as a “self-appointed lobby group”.

“This year, I have invested €114 million in tourism,” said Ross, again as if it came from his own wad. “We are seeing the fruits of this in the dazzling tourist figures.”

The record tourist figures, with almost 10 million overseas visitors, are mostly down to global economic recovery and heavy investment in routes by airlines. But that won’t stop Ross trying to claim credit for it.

Ross’s failure to prevent the abolition in the budget of the reduced 9 per cent tourism Vat rate – which, objectively, looks like a fair call by the State – was the last straw for the industry. The Restaurants’ Association of Ireland, an Itic member, called on him to resign.

The “action plan” touted this week by Ross and Griffin is too woolly to live up to its name. Its 27 “actions” are too vague and immeasurable, and the targets the plan is directed towards have already mostly been met.

Therein lies the tourism industry’s biggest problem with Ross: it feels he doesn’t have enough ambition for the sector, which is capable of creating employment in every part of the State.

Fianna Fáil has just agreed a deal to give the minority Government another year. That’s another year of Ross butting heads with tourism chiefs. More fun. More games.

– There is no let up in the war between the German discount supermarket chains, Lidl and Aldi, and their commercial rivals, which have weaponised the planning system to slow the Germans’ advance.

This week, RGData, a grocery/retail lobby group so close to SuperValu they must be able to smell each other’s breaths, filed an objection to An Bord Pleanála about a proposed Lidl development at Knocknacarra, on the outskirts of Galway city.

Lidl obtained permission for the store from the local authority last month. The German chain then issued a public statement about its rival’s use of the planning system against it. Perhaps it hoped it could shame its commercial rivals into not making any further objections.

No such luck. RGData’s Tara Buckley has filed a 10-page objection with the planning appeals board on numerous grounds, including alleged breach of retail planning guidelines by the supermarket chain.

At the very least, it will slow the process up for another few months.

Competition regulators looked at grocery players’ use of the planning system a decade ago and found issues to be addressed. They were ignored. Perhaps they should try again.

– Independent News & Media (INM) has widely trumpeted its intention to take legal action against its former chairman, Leslie Buckley, for allegedly overseeing an industrial-scale, secret operation to mine private data from INM emails.

Buckley has said he will defend himself “against each and every” allegation. At the current rate, you’d have to wonder will he ever have to.

It is almost exactly seven months since INM filed its lawsuit against Buckley. Since then, nothing else has been filed. Not a statement of claim, not an affidavit, not a motion, not a jot.

INM already has the evidence of the alleged activities presented to it by the Office of the Director of Corporate Enforcement. What else does it need to proceed?