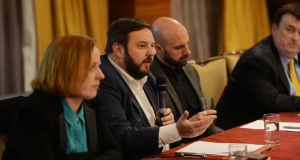 The only one who seemed well-prepared and asked a succession of erudite, intelligent questions – and who seemed genuinely interested in the answers – was Sinn Féin senator Pádraig Mac Lochlainn (pictured, with microphone, in 2017). Photograph: Alan Betson

Business journalists don’t get out that much. We tend to be kept locked in the basement to crunch numbers and write about profits and bonds. If we’re lucky, we get thrown the occasional bucket of fish heads for nourishment – like journalism’s people under the stairs, or Hugo, the attic-dwelling sibling in The Simpsons.

So the prospect of a jaunt up to Leinster House, where the political beasts roam, is like a day out, akin to a primary school trip to the National Museum followed by a stroll in St Stephen’s Green to feed the ducks. Such ordinary pleasures. But when you’re used to being manacled to a Bloomberg terminal in the dark, getting sent up to an Oireachtas committee meeting feels like a trip through the back of the wardrobe to Narnia.

Oireachtas committees are a marvel for those of us who don’t observe them regularly. There appears to be art to them. You would think that all the TDs and senators who are members of a given committee would attend each scheduled meeting to hear what the witnesses called before it have to say, before making sober comments or asking questions. Like any normal committee that has meetings in any walk of life.

Not so. Politicans roam in and out of proceedings like it’s open house at the Willie Clancy music festival. The trick seems to be: stroll in when you fancy, pretend to listen for a bit, ask an aggressive question (and make sure the media can hear you) so that your righteous pomposity is etched on the public record forever, and then walk out once you’ve got your spake in.

Job’s a good one

It doesn’t matter that the meeting is still going on. As long as the múinteoir has you marked in on the roll, and you get a mention, the job’s a good one.

On Tuesday, the Oireachtas committee on business met to consider proposed changes to the Office of the Director of Corporate Enforcement (ODCE), the State’s main investigative body for white collar crime. It is to be carved out of the Department of Business, in which it currently resides, and sent out into the world with new powers and its own budget, wobbling into the dazzling light like a day-old foal. Off you go, Trigger. You’ve got to make it on your own, now, little fellow. Don’t fall on your back again, because if you can’t get up by yourself, you might die.

Senior officials from the department were called before the committee to update the politicians on the birthing progress of the proposed new Corporate Enforcement Authority, into which the ODCE will morph once legislation is passed.

Billy Kelleher, a Fianna Fáil TD from Cork, was first out of the traps with a sermon masquerading as a question, spitting media-friendly one-liners like a pound-shop Snoop Dogg in a suit. “Gross incompetence” at the department and the ODCE; “borderline criminality” in how it has handled investigations; blah-blah-blah...

Wanted only to posture

He had no interest in obtaining information from the officials. He wanted only to posture and, as soon as he had postured sufficiently, he gathered up his papers and left. Sinn Féin TD Maurice Quinlivan was next, asking if the officials thought the ODCE, heavily criticised for its handling of certain investigations into Anglo Irish Bank, was now “fit for purpose”. Yes, was the response, now that it has hired extra specialists like forensic accountants and digital experts.

He asked about the authority’s budget, and was told the ODCE must get by on about €6 million this year.

“We don’t take white collar crime seriously in this country,” declared Quinlivan, before he gathered up his papers and left.

The committee chair, Fianna Fáil’s Mary Butler, then asked basically the same questions as Quinlivan, while she also pressed the officials on criticisms of the State’s lax approach to white collar crime in a succession of reports. Holding the gavel, as it were, Butler had no choice but to stick around.

Fine Gael senator and former minister, James Reilly, seemed to make his grand entrance about three times, before he asked if the ODCE’s Ian Drennan could appear before the committee. Then off he went. Fine Gael’s Tom Neville, wearing a red three-piece that Kelleher should have worn for his Snoop Dogg turn, asked an inconsequential question, though at least he stuck around and seemed interested. Fianna Fáil’s Lisa Chambers walked in right at the death, and said nothing.

The only one who seemed well-prepared and asked a succession of erudite, intelligent questions – and who seemed genuinely interested in the answers – was Sinn Féin senator Pádraig Mac Lochlainn. What an impressive politician he is, and a loss to Donegal in the Dáil, in which he lost his seat in 2016.

Quoting barrister Remy Farrell, he said: “There has never been a better time for white collar crime.”

Mac Lochlainn correctly highlighted the inglorious lack of co-ordination between the various State agencies holding varying remits into combating white collar crime – the Central Bank, the ODCE, the Competition and Consumer Protection Commission, and so on – and called for them all to be drawn together under “one umbrella” with a well-resourced Corporate Crime Agency at the apex.

The officials didn’t give a convincing answer, just a version of “that is not how things are done around here”.

Mac Lochlainn than raised a highly pertinent issue that has never been properly addressed in the ongoing political drama and the rush to snatch business for this State from the City of London. Barclays, he highlighted, last month chose to move €190 billion of assets to Ireland to escape Brexit. There are many others just like it doing exactly the same.

What risk is all of this bringing to the State? How equipped are our corporate watchdogs, really, to know fully what is going on beneath the bonnet of all the gargantuan asset portfolios washing onto our shores from the UK’s Brexit tidal wave?

The extended family of the late, great Dr Pearse Lyons of agri-tech business Alltech, who passed away a year ago next month, are carrying on with the wily old entrepreneur’s grand vision. His son, Mark Lyons, continues to run the company as its president and chief executive. Meanwhile, the late Dr Lyons’s nephew, Aidan Connolly, has co-written a sunny-side-up, uplifting business book, along with his wife, Kate Phillips Connolly.

The book, Plan Your Explosive Business Growth – As Simple as 2-1-4-3, is stuffed full of the sort of counterintuitive, business “disruption”-style advice that would have made Connolly’s late uncle proud.

Aidan Connolly served for many years as chief innovation officer of Alltech, working across the globe for the business. His thesis, developed during his career at the group, is that many businesses plan in an overly linear fashion – 1 (how did we get here, or essentially the past); 2 (where are we now, the present); 3 (what are we going to do) and; 4 (where do we want to go, essentially the future).

Connolly’s idea is to switch that sequencing around to 2-1-4-3, devising business strategies around firstly assessing where you are now (2), then analysing the past (1), and setting objectives for the future (4), before finally, deciding on actions and tactics to get you there (3).

The book, published on this side of the pond by Context Publications, comes with recommendations from business academics and also practitioners, such as the European head of Linkedin, John Herlihy, who originally ran Google in Dublin.

The recommendations and citations run to four pages. There is, of course, no point in the business world in being backwards about facing forwards.

1 Who are Ireland’s 17 billionaires?
2 Are there annual limits on inheritances or gifts to a child?
3 My father in a nursing home wants to gift me his house
4 Countries that fail to attract immigrants will lose out – Microsoft chief
5 State subsidises public sector retirees to cover gap until State pension
6 Proinsias O’Mahony: Should investors ‘drop their shorts’?
7 Inbreeding poses major threat to Ireland’s thoroughbred horse sector
8 Ten of the most mysterious aircraft disappearances
9 Dublin office vacancy rate hits lowest level in 20 years
10 An unlikely king of capitalism
Real news has value SUBSCRIBE