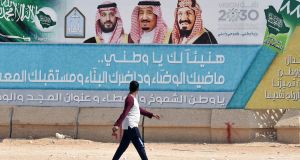 The pressure on business leaders to cut or suspend ties with Saudi Arabia following its apparently barbaric murder of a journalist illustrates the dangers companies face in the social media era, if and when their links to unsavoury regimes go viral. In the Irish business community, these sort of links are everywhere.

As well as being a moral and ethical morass, keeping ties with the type of despots who appear to have ordered the butchering of Jamal Khashoggi can easily flare into an oh-so-modern public relations disaster for any business in the digital age.

Saudi regime critic Khashoggi, the evidence suggests, met a grisly end at the Gulf state’s consulate in Istanbul. As his state-backed murderers dismembered his body, they also cut through the ludicrous veil of respectability that the Saudi crown prince, Mohammed Bin Salman, has thrown around himself in recent years. His PR efforts were part of a plan to modernise the Saudi economy, and attract investment and technology from the West.

Following the global uproar over Khashoggi’s disgusting end – par for the course for the Saudi regime except that, in this case, the news went far and wide – the 33-year-old Bin Salman is now seen by western business leaders for what he really is, which is not the forward-looking reformer whose image he craves.

Does any of this matter to Irish business leaders? It should if they don’t want to wake up one morning to find their company’s reputation in the dock when some macabre story involving their eccentric friend flies across the world in a digital frenzy.

Ryanair’s chairman, US-based private equity tycoon David Bonderman, who has close Saudi links, was among the global business leaders who this week pulled out of a Bin Salman-backed Riyadh investment conference. The billionaire Richard Branson, Jamie Dimon, the chief executive of JPMorgan Chase, and Bill Ford, chairman of Ford motor company, were also among those to back out under intense media pressure.

Davos in the Desert must not seem half as appealing to the marketing department when your links to people with links to the events of Istanbul are under the microscope. Even though the global wave of condemnation largely washed over the rest of the Irish business community, some here still got roughed up by the ripples.

On Tuesday morning, I scrolled through the website of the Irish Saudi Arabia Business Council (ISABC), a private sector trade promotion body whose directors include Taxback entrepreneur Terry Clune. ISABC’s Dublin address is given as the same St Stephen’s Green office that is listed for Taxback. Its members also include Saudi state-backed bodies, such as the Saudi Industrial Development Fund.

I noticed an ISABC public event had been arranged this Thursday with Ibec, the employers’ business lobby. The two had set up a showcase of business opportunities in Saudi Arabia, which was to be held at the Shelbourne Hotel close to ISABC’s offices. Danny McCoy, Ibec’s chief executive, was listed as speaker.

Given the furore surrounding Davos in the Desert, I asked Ibec if it still planned to go ahead with the event. On Tuesday night, it assured me it would proceed, and that McCoy would speak to an audience including the Saudi ambassador to Ireland, Nail Al Jubeir, and a “commercial attaché” from the embassy.

This was mentioned only briefly in the online version of a Bonderman story. But by lunchtime on Wednesday, the National Union of Journalists had publicly called on Ibec to pull out, in protest at the barbarity meted out in Istanbul to a journalist. The reputational danger for Ibec became clear. Later that afternoon, it called the event off.

In the age of Twitter and Facebook, viral stories easily become enmeshed with online social activism to create nightmare scenarios.

In the specific arena of commercial links to despotic regimes, three types of story should set off red warning lights: the abuse of free speech or journalists; the persecution of women or minorities; and the persecution of gay people.

Saudi Arabia is a cornucopia for all three. But it is not the only repressive nation where you’ll hear Irish accents seeking access to power to discuss their investments. The exploration industry, for example, has long since learned to work with despots.

John Teeling, the sector’s elder statesman in Ireland, who has dealt with people such as Zimbabwe’s Robert Mugabe and various rulers of Iraq and Botswana, once told me about his approach: “I am not political. A country gets the government it deserves. I’ll deal with whoever is in charge. My only concern is that I get proper title. If people don’t like their government, they can change it.”

That was 2011, before social media became so dominant. I’m not sure such an uncompromising philosophy would hold water now, if one of his company’s political links were to fall under scrutiny in the midst of a global story. It’s no longer beyond the bounds of possibility that this could happen.

Tullow Oil, the Irish exploration industry’s greatest export, has links with some of the most unsavoury leaders of African nations. Aidan Heavey, its former chief executive, spent years building a relationship with Yoweri Museveni, Uganda’s autocratic ruler who brought in notorious laws that terrorised gay men and women.

Last week, Kanye West and Kim Kardashian were widely ridiculed for posing with Museveni. Is it too much of a stretch to see a viral story one day emerging that links the Trump-backer West, Uganda, and gay rights?

That may not matter to Tullow, which has experience. It also must deal with the likes of Equatorial Guinea’s leader Teodoro Obiang (famed internationally as “the most kleptocratic of autocrats”) and Gabon’s Ali Bongo Ondimba, who has denied streams of unsavoury allegations.

CRH, meanwhile, has a major investment in the Philippines, where the Trumper-than-Trump leader, Rodrigo Duterte, looks like he could be at the centre of a viral story any day of the week. Is CRH ready to be asked about this when it comes?

Smurfit Kappa (Venezuela), Kerry Group (Belarus), Kingspan (Iran)... they all have business links to countries whose leaders at times glow in various shades of crazy.

The alternative, of course, is that Irish companies would never do business in developing nations where despotic regimes are most prevalent. But that is clearly an unsustainable and probably morally suspect position in itself.

For those who plough on regardless, this week’s Saudi furore should be a warning: expect the unexpected from your “friends”, and know when to back away for your company’s sake.

– Andy Wigmore, a former communications chief of the Leavers campaign for Brexit, loves to spend his time goading “remoaners” on Twitter. Chief among his targets are the Irish Government and Irish Border concerns generally. His Irish-linked tweets are often decorated with shamrock emojis.

Oh how his detractors howled this week when a company document emerged from Gibraltar, where the gobby Wigmore’s nationality was listed as . . . Irish.

It was a 2015 filing with authorities there finalising his resignation as a director from Southern Rock Insurance Company, owned by Brexit campaign financier Arron Banks, who is the Montgomery Burns to Wigmore’s Waylon Smithers.

Wigmore, who claims British and Belizean citizenship, says he has no idea why the document lists him as Irish. It isn’t signed by him, and may have been a clerical error.

“As for the O’Wigmores of Gibraltar, [I’ve] not got a clue why it says I’m Irish,” he said, throwing in a few of those emojis to make his ignorance easier to spot.

Banks then chimed in with some poetic quip comparing Wigmore’s Irish links with the DNA of “Pocahontas”, US president Donald Trump’s derogatory put-down for US senator Elizabeth Warren, whose claims of native American heritage he has ridiculed.

Brexit will be a disaster for these guys. Where else will they find the army of migrant workers they’re going to need to dig them out of Trump’s backside when this is all over?

– Richard Bruton has just taken over from Denis Naughten as Minister for Communications and the man responsible for delivering the ugly baby known as the National Broadband Plan. Such a switch is also known as a “hospital pass”.

Bruton could do worse than examining whether to reopen the NBP tender altogether, to incorporate the 5G mobile services that would likely make the scheme’s aims easier to deliver. By the time the contract is awarded, it will probably need 6G.