Caveat: From soft landings to strategic tie-ups, business is a world of total nonsense 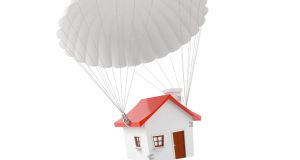 We all remember the last “soft landing” predicted for the housing sector. Wasn’t it just like floating down from a cloud on to a big pile of marshmallows using a picnic blanket as a parachute?

Everything was fine this week until the ratings agency Standard & Poors (S&P) apparently predicted a “soft landing” for the Irish property market. Cue a national panic.

We all remember the last “soft landing” predicted for the housing sector. How unbelievably, incredibly soft was that landing? Wasn’t it just like floating down from a cloud on to a big pile of marshmallows using a picnic blanket as a parachute?

House prices, of course, didn’t “land slowly” the last time. They hit the earth like a cruise missile, eviscerating the rest of the economy. As we all know by now, housing markets rarely have “soft landings”. But they often “crash”. Occasionally, house prices might even “plunge” or “slide”, which, while bad, isn’t as bad as a crash.

Whether it is “soft landings” or “market crashes” or “price plunges”, the world of business (and business journalism) is a veritable cornucopia (*sigh) of ready-made writing clichés, euphemisms and brain-deadening jargon. It just comes with the territory: business is too stage-managed and people can slip into autopilot. Obviously, we are as guilty of such heinous transgressions on these pages as anywhere else.

Before proceeding, however, it is worth pointing out that S&P didn’t actually say this week that Ireland is heading for a “soft landing”. The report, entitled European Housing Markets are Staging a Soft Landing, examined the situation in 10 different European countries. It directly applied the “soft landing” terminology to some of the larger markets, such as France and the UK.

Ireland, however, was adjudged by S&P to be in a situation where constraints are still sharply “fuelling growth” in the market. It predicted house prices would continue to rise quickly in coming years, before the pressure “gradually subsides”. Maybe this implies a soft landing but, in the near term, it sounds more like a market “spike”.

All sorts of things spike in business journalism. Redundancies and insolvencies tend to spike when the economy gets bad. House prices, of course, spike when they’re not crashing. So, too, do oil prices, which can even spike and crash in the same week. If things get really, really bad after too much spiking, and a mere crash just won’t cut it, prices can “collapse”. That’s when you really need to worry.

Trawling Irish Twitter for people’s least favourite items of journalese, it soon became clear that those who write about the hospitality business have an awful lot to answer for. What is an eatery and who has ever spoken such a silly word in real life?

An eatery is just a restaurant that happens to be in the same paragraph as another restaurant. And what happens to “nightspots” during the day? And let’s not even start with “revellers”, who are presumably just the customers of eateries and nightspots.

Accountants don’t simply cut costs any more, they slash them, while simultaneously boosting their profits. Anybody with a degree who works in a technology business is a boffin.

Businesses don’t just consider takeovers, they mull them. More often, they “circle” other companies and assets. Apparently, developers have been circling the best development sites in Dublin 4 for the last few years. What happens if they get too dizzy to build houses on them? How will we stage a soft landing then?

Occasionally, when one company finishes circling another and it doesn’t simply buy it, they can launch something called a “strategic tie-up”. Apparently, Siro has some sort of a strategic tie-up with Sky Ireland on broadband. Laya Healthcare also has one with Affidea for walk-in injury clinics.

But, in reality, there are no tie-ups at all in business, except when randy executives literally attach each other to bedposts with fluffy pink handcuffs. Those tie-ups become strategic, presumably, if you do it to your boss.

When companies that experience many tie-ups and “mergers” get extremely large and powerful, they become “behemoths”, even though nobody normal ever says this word. CRH is certainly a behemoth in Ireland, where it is the largest listed business, but it isn’t in the US, where behemoths go to be with their own kind. Tesco used to be a behemoth, until Aldi and Lidl came along and took away some of its dominance.

Behemoths don’t have bank accounts or cash safes, they have coffers. The State also subsists on the contents of its coffers. In fact, any large organisation that you don’t really like, like a bank, keeps its cash in coffers.

And from these coffers, their most senior executives will take bonuses, and they will “trouser” them. Anybody who is richer than you will ever be always trousers their money.

There’s no jealousy in any of this at all.

– Serial entrepreneur John Teeling has always been had an eye for a business opportunity, and an ability to see around corners to protect his investments. His son Jack, who founded Teeling Whiskey in Dublin six years ago, appears to be a chip off the old block.

Latest accounts for Teeling Whiskey Company show a property transaction between the distiller and its founder last year. Teeling Whiskey sold a nearby property for €504,935 to a company called Blacksheep Investments, which is controlled by Jack Teeling.

The accounts state that a qualified property consultant was engaged to “obtain a valuation for the property prior to the sale”. The property was a run-down pub called Ardee House, located some 150 metres from Teeling Whiskey’s distillery in Newmarket, Dublin 8.

It seems Jack originally decided the whiskey company should purchase the property for fear that one of its competitors – say, Irish Distillers – might buy it and open up in competition. A pop-up Jameson bar across the road from the fledgling Teeling distillery wouldn’t have been great for business.

The property has been idle ever since and, with Teeling Whiskey ramping up for a major sales campaign around the launch of the first batch of its own creation, a decision was taken to sell the former pub. Jack has yet to decide what he will do with the property.

– Many within the Irish hospitality industry were this week circulating a report from a Romanian trade magazine, which stated that the former eastern bloc country is about to cut its tourism VAT rate from 9 per cent to 5 per cent.

The industry argues this shows that Ireland’s reduced tourism rate of 9 per cent, which appears to be at least partially under threat in the upcoming budget, is just competitive by international standards, and not too low. In France and Italy, for example, tourism VAT is 10 per cent.

But you can’t just isolate a single tax rate and hold it up as proof that Ireland is only keeping pace with the competition. Romania’s tourism VAT might be cut to 5 per cent, but corporation tax there is one quarter higher. Bucharest hotels also have a 3 per cent “city tax”. Imagine what the industry would say if that was introduced here?

France, Spain and Italy may have tourism VAT rates quite close to Ireland. But what about their income and employment taxes? If you want the VAT rates to be the same, shouldn’t you want the rest of the businesses taxes to be harmonised too?

1 ‘No demand... because there are no people’ at well-known Dublin pub
2 UK criticised for ‘unforced errors’ on post-Brexit trade deals
3 Nearly 30,000 could lose pandemic payment if they do not confirm eligibility
4 Bank of Ireland does U-turn after refusal to reimburse ‘smishing’ victims
5 ‘It’s not about beating the life out of a price for the sake of it’
6 Facebook agrees Irish wind-farm deal with Brookfield in Tipperary
7 What will the office market look like after the great remote working experiment?
8 Help, I’ve no PRSI stamps – can I still get a pension?
9 Cinven to buy Dublin-headquartered Axa Life Europe in €925m deal
10 Three Ireland boss Finnegan to also lead operator’s UK business
Real news has value SUBSCRIBE