Time to update our analogue laws to cope with digital economy 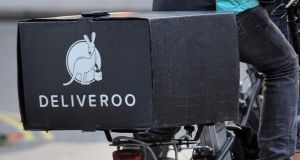 The regulatory environment that surrounds businesses in the on-demand economy is often based upon principles and assumptions that no longer apply. Photograph: Nick Ansell/PA Wire

The way consumers access many everyday products and services has been turned on its head over the past five or six years by smartphones and the on-demand economy. So isn’t it about time the regulatory environment caught up?

The most basic commercial interactions have been transformed. This week, for example, Lidl announced a partnership with Dublin-based online grocery shopping app Buymie. It will take online orders from Lidl customers in the capital, dispatch a self-employed personal shopper to zoom the aisles of the nearest store, and then deliver the goods to the customers in as little as one hour.

The service comes at a chunky price – up to €6.99 for delivery with an additional “platform fee” of up to 14.75 per cent of the cost of the items. But the appeal is obvious. No more driving to the supermarket, queuing at checkouts and lugging heavy bags to the boot of the car.

Instead, simply wander to your larder or fridge, smartphone in hand, tap in what you’re short of and go back to the couch and wait for your doorbell to ring. Tesco is also hooked up to Buymie and it is only a matter of time before the other supermarket chains follow suit with similar services. The game has changed.

When is the last time you rang a taxi base, called out your address to the dispatcher and waited, wondering how long it would take for your taxi to show up?

Now, with the advent of GPS technology and smartphones, you can simply tap an app that is hooked up to your debit card, and track your driver’s progress en route to picking you up. You can even indicate a preference for your favourite drivers. Such a mundane thing – booking a taxi – has been utterly revolutionised.

The notion of finding private accommodation for a weekend getaway by trawling listings of B&Bs or holiday apartments, and calling them up to check availability and to book, now seems quaint. Yet as recently as five or six years ago, before Airbnb became ubiquitous, this is what most people did.

Fancy an Indian or a Chinese to inject some culinary indulgence into your Saturday night at home? Most of us used to call our favourite takeaway – perhaps its menu was pinned up somewhere in the kitchen – to place an order. In the past five years, aggregators such as Just Eat and Deliveroo have upended the sector.

WeBringg is an Irish start-up that operates in a broadly similar fashion to Buymie, but with products from all manner of retailers. It promises up to 90-minute delivery, courier-style. In London, Amazon Prime Now offers free delivery within two hours.

UrbanSitter, which in the United States has revolutionised how parents find and recommend babysitters, hasn’t come to Ireland yet, but it may do in the near future.

The vehicle-sharing service GoCar isn’t yet ubiquitous but it is on the rise. Who would have thought five years ago that it would be perfectly normal to walk up to a car you don’t own, open it using your smartphone, find the keys inside and rent it by the hour.

Many of these new services have spurred issues for workers and customers that would have been unthinkable a few years back.

Just how “self-employed”, for example, are Buymie or WeBringg drivers if the prices are set by the platform? They use their own vehicles. What impact does that have on their insurance? The small print on the Buymie app makes it clear that the platform takes no responsibility for “the acts or omissions” of its delivery drivers. Who does take responsibility?

We must not be Luddites. The on-demand/sharing/access/gig economy – call it what you will – is here to stay. It has propagated an entirely new, and more efficient, economic model that allocates resources and connects participants in ways that would have been unimaginable to most consumers a few years ago.

But the regulatory environment that surrounds these businesses is often based upon principles and assumptions that no longer apply. We are stuck with analogue laws in a digital age.

This doesn’t just apply to the myriad rules and regulations that are supposed to protect workers and customers. Investors are also affected.

It is now common for many technology start-ups to be financed by peer-to-peer lending or equity crowdfunding. Shouldn’t the rules of disclosure around the raising of capital be updated to take this into account?

The regulatory system has, so far, been too reactive in relation to this new way of doing business. The response has been fractured. A new set of rules to cope with the effects of Airbnb on the housing market; a nebulous review of the financial rules around crowdfunding; much wailing and gnashing of teeth around employment laws. But no sense of coherence in the overall regulatory approach.

Ireland is meant to be the Silicon Valley of Europe. The State needs to get ahead of this economic revolution, and convene a forum of all relevant stakeholders – technology investors, consumer advocates, workers’ groups, regulators – where these new issues can be identified and solved.

It could help to devise a broad set of principles that could apply to the regulation of the on-demand economy – how to categorise new forms of employment, how to ensure protection for consumers who buy services through online platforms; and how to nurture this new economy without crimping its innovation.

The economy has been Uberised. So, too, should the rules.

– Dómhnal Slattery, the chief executive of aircraft leasing giant Avolon, was among the industry bigwigs interviewed onstage this week at the Airfinance Dublin 2019 conference, at the convention centre in the city’s docklands.

Slattery revealed to the audience that he recently skied to the South Pole, which was presumably more fun than flying there. Colder, though, I’d bet.

Slattery was warmer, meanwhile, on the prospects of General Electric selling Gecas (GE Capital Aviation Services), the leasing behemoth headquartered in Shannon that is rumoured to be on the verge of being flipped to private equity. Slattery predicted the announcement of a deal in the first half of this year.

His industry counterpart Aengus Kelly, the chief executive of AerCap, was also interviewed onstage at the conference, where he was also asked about the possibility of a deal for Gecas. Slattery may be the skier, but Kelly was much colder than his counterpart on the prospect.

Meanwhile, when the turn came for Alec Burger to take the stage, the Gecas chief executive said nothing at all about any prospective deal. Ice cold is Alec.