Planet Business: A billionaire’s sailing dispute and the ads censured for risky driving 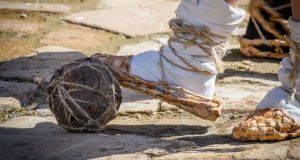 Image of the week: A performer in the Russian World Cup host city of Saransk uses traditional bast shoes to show photographers how football would once have been played. Photograph: Mladen Antonov / AFP / Getty

Percentage rise in the price of vanilla pods since 2016, with the result that the sweet ingredient now costs more per kilo than the precious metal silver, leaving a bitter taste in the mouths of ice-cream suppliers that use natural ingredients.

Percentage of the world’s supply of “real” vanilla that comes from the island of Madagascar, off Africa, where vanilla plantations have been damaged by cyclones and hit by political unrest.

Percentage of vanilla used in the West that is estimated to be a synthetic flavouring, meaning the Madagascan vanilla pod crisis probably shouldn’t be used as an excuse for higher prices.

Image of the week: Kick-off approaches

As part of the promotional hoopla for the Fifa World Cup in Russia, a performer in tournament host city Saransk wearing traditional bast shoes (known as lapti) shows how football would once have been played in rural Russia. Saransk, in Mordovia in central Russia, is “one of the most pleasant cities in Russia”, according to Fifa’s website, though occupants and former occupants of the region’s gulags might disagree.

A 40,000-seat football stadium with bright orange mosaic cladding has been constructed in the city for the purposes of holding four World Cup matches and part of it will be dismantled afterwards. While FIFA generally has been lambasted for looking the other way over human rights abuses in Russia, the Saransk stadium has lately garnered headlines for its “accidental” similarity to Johannesburg’s FNB stadium, which also has bright orange mosaic cladding.

What attracted you to the billionaire Elon Musk? If you’re Claire Boucher, aka Canadian musician Grimes, who the Tesla boss is now dating, the answer is an appreciation of an AI-related pun that even tech site Mashable deemed “super nerdy”.

Yes, this is just the everyday tale of boy meets girl because boy wanted to make a joke (sort of) about artificial intelligence only to find that a girl got there first. In 2015, Grimes created a character called “Rococo Basilisk” for a music video – a Marie Antoinette-like character doomed to be eternally tortured by AI. This punned on “Roko’s Basilisk”, a thought experiment which posits that those who don’t help AI into existence will later be punished by an all-powerful AI.

After Musk came across her, ahem, work, he got in touch: “Grimes says this was the first time in three years that anyone understood the joke,” a source told news site Page Six. And off they went together to New York’s Met Gala, at which she wore a choker necklace bearing the Tesla logo.

Getting to know: Jim Ratcliffe

Billionaire Jim Ratcliffe, like James Dyson and that bloke from Wetherspoons, belongs to a select group of British businessmen who are pro-Brexit. Indeed, the founder and chairman of chemical company Ineos believes it is important for the British to retain their “sense of humour” in Brexit talks.

He’s been in the news this week thanks to a branding dispute involving an America’s Cup sailing team that he sponsors. Calling the team Ineos Team GB has infringed on the Team GB trademark held by the British Olympic Association, which said Ratcliffe had to pay for the pleasure of using it. The Daily Telegraph reported that an aggrieved Ratcliffe, who is worth about $16 billion according to Forbes, has instead renamed his team Ineos Team UK and invited the BOA to “take a long walk off a short plank”. Lovely.

Risky behaviour on the roads is only meant to feature as a cautionary tale in road safety advertisements. Alas, both car manufacturers and non-motoring brands, such as those mentioned below, have been known to fall foul of advertising standards for showcasing less-than-ideal road practices.

1. BMW: To the “woo-hoo” soundtrack of Blur’s Song 2, BMW showed a vehicle in all weathers skidding on a dirt track with the line “remember when everything you did was for the sheer pleasure of doing it?”. The UK’s Advertising Standards Authority was not impressed.

2. Toyota: A Toyota Yaris ad from 2015 originally featured a driver appearing to close her eyes as she sang along to the Bruno Mars song Locked Out of Heaven. This section was swiftly edited out of the ad.

3. Aviva: An ad for the insurer featuring Formula One driver David Coulthard disguised as a taxi driver was banned in Britain last year after it was judged to feature one too many high-speed stunts for comfort.

4. AIB: Some sympathy must be reserved for the makers of a 2017 AIB mortgages ad who didn’t manage to correctly navigate the fiendishly complicated world of child seats – a harness was deemed too loose.

5. Kerry Group: A television ad for Denny sausages and rashers showed a grandfather momentarily taking his eyes off the road to look at his baby granddaughter. The ad was re-edited to place the grandfather in the passenger seat.