Companies put investment decisions on hold ahead of Brexit 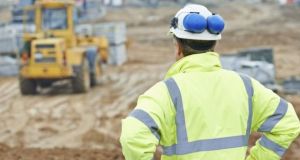 Companies in the construction sector in particular are feeling the pinch, according to InterTradeIreland’s survey

Business growth is at its lowest in more than five years as companies adopt a “wait and see” attitude to investment decisions, a new survey shows.

The latest quarterly InterTradeIreland business monitor report shows many organisations have effectively pressed pause on their plans, partly as a result of Brexit.

According to the survey of more than 750 business managers, confidence is a growing issue for companies with the percentage of businesses reporting an increase in employee numbers, the lowest since 2009.

InterTradeIreland said while there is no immediate cause for concern, the findings do indicate that many businesses are wary about making big investments currently.

The report finds that while the level of preparedness for Brexit has improved, it continues to be low with just 8 per cent of cross-border traders having a plan in place

“Overall, there is a sense that business across the island is holding its breath and we are at a crossroads. This number of businesses reporting to be in stability mode is the highest level since we began recording business position in 2011. While this is in no way cause for alarm, we also see that companies in growth mode is at the lowest mark since 2009,” said Aidan Gough, director of strategy and policy.

“Firms are operating against a back-drop of increasing pressure on the high-street, the spectre of inflation, salary increases and uncertainty around Brexit. It is understandable that many businesses at this juncture may be feeling hesitant,” he added.

Companies in the construction sector in particular are feeling the pinch with a significant drop in businesses in a growth position, from 42 per cent to 16 per cent, versus the previous quarter.

In addition, one-fifth of businesses in the sector said they were operating below capacity while just 4 per cent reported an increase in sales.

The report finds that while the level of preparedness for Brexit has improved, it continues to be low with just 8 per cent of cross-border traders having a plan in place.

In contrast, 55 per cent of companies claim to be ready for the general data protection regulation, which comes into effect later this month.