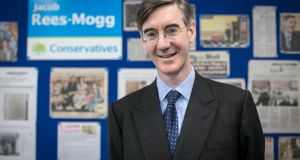 Jacob Rees-Mogg: When you hear Conservative Brexiteers such as him talk about Britain deciding what kind of borders it wants to have after Brexit, it is clear they don’t know what they are talking about, or are choosing to ignore reality. Photograph: Matt Cardy/Getty

The interests of business are being pushed aside in the Brexit talks. Because the politics has not made progress, there has been far too little emphasis on the nitty gritty detail of how the world after Brexit might actually be made to work, or any proper assessment of how long it might take to get there. This is the stuff which businesses need to know. And Brexit is a bagful of intricate, complex, endless “stuff”, like a Russian doll with layer after layer of detail.

Listening to people involved in trading across borders, you get a sense of all the things that needs to be done. But nobody has put enough time into thinking how to do them . The rules of the EU trading bloc – the single market and customs union – have built up in a web of different pieces of legislation, as well as through custom and practice. This is why working out what happens next is so darn complicated.

The latest political developments in London cut the chances of the UK reaching a deal with the EU and increase the risk of a hard – or no deal – Brexit. A big row is erupting in London and no one has a clue where it will lead. For businesses, the risks are rising. If a withdrawal deal cannot be reached between the UK and EU, then all bets are off. The transition deal, designed to avoid chaos when the UK leaves in March 2019 by postponing most changes until the end of 2020, would also fall – and there would be no certainty about future trading arrangements.

While the debate continues at a high political level, businesses are fretting. I listened recently to some senior executive in the UK transport sector talking at a UK parliamentary committee. They were quietly asking the key questions for trading businesses.

Who will need to send what forms to whom for customs clearance and how will this be arranged online? Who makes what kind of border checks? How does the UK create enough room at its big ports for the longer queues? How is time to be found to train enough people in how customs works, both in officialdom and in businesses? It was clear they believed that the level of on-the-ground preparation was deeply inadequate.

And it goes on. On Tuesday, Bloomberg reported there would not be enough public health vets to check food and animal exports from the UK to the EU after Brexit, should such checks be needed.The UK has about 550 public health vets and could need another 400 if all exports and imports have to be checked.

This isn’t a trivial matter of bureaucracy. This is about food safety and the ability of companies to continue to go about their normal business. When you hear Conservative Brexiteers such as Jacob Rees-Mogg talk about Britain deciding what kind of borders it wants to have after Brexit, it is clear they either don’t know what they are talking about, or are choosing to ignore reality. Apart altogether from obligations imposed by World Trade Organisation rules and the requirements of other countries who will trade with the UK, not having proper food checks, for example, would be to run serious risks with public and animal safety. Anyone fancy a new outbreak of foot-and-mouth disease?

The signs from London are that the hard Brexit lobby doesn’t care how business is damaged – it just wants to get out of the EU and all its institutions. The row has crystallised as the UK cabinet has spent the last few weeks arguing about two new models for customs arrangements, both – on the face of it – already rejected by Brussels.

There were some hopes in Dublin that part of what might emerge was that the UK would effectively tie itself into the EU customs union, which would be a relief for Irish exporters and would be one way to solve the Border conundrum. But the hard Brexit lobby insists this cannot happen.

Businesses here and in the UK have expected – or at least hoped – that politicians would take a reasonably sensible course, insofar as any way to Brexit could be described in those terms. Watch the level of concern grow in the next few weeks. In the UK, the business lobby presumably does not want to undermine Theresa May, while here there are sensitivities as the Government tries to get assurances on the Irish Border. But it may soon be time to take the gloves off.

All the signs are now that the defining political battle lies ahead. The business lobbies on both sides of the Irish Sea need to get stuck in. Unless Brexit is delayed – either through some postponement of Article 50 or an elongated transition period – all those thousands of details which need to be sorted simply won’t be done.

The political debate in the UK is at risk of completely ditching the interest of business and the economy. Much of what is being said bears little relationship with reality. Businesses need to start being much more aggressive in calling out the hard Brexit lobby and outlining the costs of what is now at risk of happening. It has turned into a Conservative Punch and Judy contest and the economic consequences of a hard Brexit are not being hammered home.