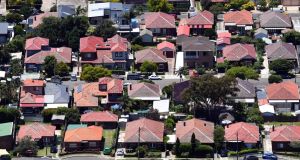 Compared with their 2017 peak, house prices in Sydney have now dropped 11.1 per cent. Photograph: Mick Tsikas/EPA

Australia has not seen a recession since the June quarter of 1991 but if house prices can be a harbinger of economic wellbeing, storm clouds are gathering.

The country’s 109 consecutive quarters of growth is a world record and has seen it weather the Asian financial crisis of the late 1990s, the collapse of the dotcom bubble in the early 2000s and the global financial crisis of the late 2000s. Even the end of Australia’s once-in-a-generation mining boom in 2014 did not tip the country into recession.

But Sydney house prices have recently recorded their biggest monthly fall for 14 years. Melbourne is close behind and the OECD has told the Australian government to prepare for a hard landing in the housing market.

More than $9 billion Australian dollars (€5.7 billion) has been wiped off the combined market values of seven of the country’s largest building suppliers since June (from about $39 billion to $30 billion), and other areas of the economy are concerned this could prompt already cautious consumers to further cut their spending.

Even the staunchest believers in Australia’s ability to plough through crises relatively unscathed will have been alarmed at the headline on an article by Philip Hemmings, head of the Australia desk in the OECD’s economics department- “Australia’s cooling housing market; is the economy at risk?”

Hemmings noted that “prices have more than doubled in real terms since the early 2000s and household debt has surged. The market has started to cool over the last year, with prices falling most notably in Melbourne and Sydney”.

Despite Australia’s history of avoiding the sort of pitfalls to which other countries have succumbed, he warns the “risk of a hard landing remains”.

The downturn has prompted Torsten Slok, Deutsche Bank’s chief international economist, to list the Australian housing market as one of the top 30 economic risks to look out for in 2019.

A “house price crash in Australia and Canada” ranks alongside a no-deal Brexit, the US government shutdown and the escalation of the US-China trade war in the bank’s list of potential financial danger moments.

The Reserve Bank – Australia’s central bank – has called on the country’s biggest banks not to overly restrict their lending during the housing downturn, warning that if borrowers are scared away it will affect the rest of the economy.

Guy Debelle, the Reserve Bank’s deputy governor, said a major lesson learned from the global financial crisis was the vital importance of maintaining lending, and “that lesson is relevant to the situation today in Australia”.

Compared with their 2017 peak, Sydney and Melbourne’s house prices have now dropped 11.1 per cent and 7.2 per cent respectively, and a sharp fall in the December quarter hints that the decline is picking up pace, according to data researcher CoreLogic.

Prices dropped 4.8 per cent in 2018 nationwide. The mean price of Australia’s residential dwellings is now $675,000, down from a peak of $697,100 at the end of 2017. The mean house price fall in Sydney from peak to trough is now expected to be about 15 per cent, the largest reduction since the last recession almost three decades ago.

“The biggest fall was 9.6 per cent in the last recession, from 1989 to 1991,” business data company CoreLogic’s head of research Tim Lawless said. “It looks like this downturn will be the largest and longest since our records started.”

There is a fear that consumers, who are already spending less due to low wage growth – just 1.2 per cent in the past 12 months – will become even more cautious as the value of their homes fall.

What makes the dramatic house price drop unusual, particularly in Sydney and Melbourne, is that interest rates and unemployment are low – generally conditions associated with rising prices and rising wages.

The Reserve Bank’s cash rate has been at a record low of 1.5 per cent for 28 straight months and unemployment is 5 per cent.

This probably explains why the OECD tempered its caution with some positivity. “Life [in Australia] is good, with high levels of wellbeing, including health and education,” the group said.

But, although Australia has demonstrated a “remarkable capacity” to increase living standards and absorb economic shocks, the OECD has stressed challenges remain and “some Australians are at a significant risk of poverty, despite the strong economy”.

“Indigenous Australians are almost twice as likely to be poor than [other] Australians, and . . . the gap has risen over the last two years,” wrote OECD economist Urban Sila. – Additional reporting: Guardian

1 Chris Johns: Boohoo exposed on pay and conditions in digital economy
2 Michael O’Leary is the boss you want to lead an airline out of crisis
3 Hotel bookings collapse in wake of additional Covid restrictions
4 In this strangest of recessions, what happens next for Ireland?
5 Estée Lauder staff at Dublin airport plan further strike action
6 Bank of Ireland sees about 2,000 staff apply for voluntary redundancy
7 Best Covid-19 ‘influencers’ will avoid hectoring
8 Should I switch bank now with Ulster Bank at risk of closing?
9 The wealth of the Irish – how do your assets match up?
10 FBD changes wording of insurance policies as fight over virus payouts plays out
Real news has value SUBSCRIBE