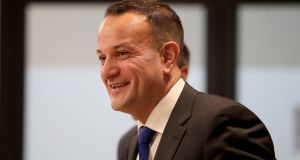 Taoiseach Leo Varadkar. The positive outcome for the State’s finances was published shortly after the Cabinet heard the UK’s latest plans for a no-deal Brexit. Photograph: Donall Farmer

The Government ran a budget surplus last year for the first time in more than a decade, following the record collection of €10.4 billion in corporation tax, largely from multinationals.

However, nearly 40 per cent of the corporate tax returns come from just 10 large multinationals.

Tax receipts are up by almost €4.3 billion (8.3 per cent) on last year “underpinned by a strong economy”, said Minister for Finance Paschal Donohoe, but spending has risen in tandem, up by nearly 7.7 per cent.

The figures left the exchequer with a modest surplus, of just over €100 million – but an important benchmark is that this is the first time this has happened since 2006.

Meanwhile, the positive outcome for the State’s finances was published shortly after the Cabinet heard details of the latest plans for a no-deal Brexit by the United Kingdom from the European Union in late March.

Heightening the warnings further, the British environment secretary, Michael Gove, warned that meat imports and exports to the UK will face 40 per cent tariffs if the UK exits without a deadline.

“All products of animal origin will have to go through Border inspection posts and, at the moment, the EU have said 100 per cent of products will face sanitary and phytosanitary checks,” he told an Oxford conference.

Ireland’s increasing dependence on corporate tax is highlighted by the fact that it is now the Government’s third-largest tax source – producing 19 per cent of revenues, raising echoes of the dependence on construction taxes that existed before the 2008 crash.

Insisting that he was handling the State’s finances prudently, however, Mr Donohoe said he had stripped out one-off corporation tax gains in this year’s figures.

“So our opening position for this year is based on us collecting less corporation tax than we collected last year,” he said.

He also said his decision to remove the lower rate of VAT for most of the hospitality sector was aimed at broadening the tax base and insulating the exchequer against future downturns.

The latest exchequer numbers show the Government collected a record €55.6 billion in taxes last year, which was 8 per cent or €4 billion up on the previous year.

Income tax, the Government’s largest tax stream, generated just over €21 billion – marginally below target, but nearly €1.2 billion or 6.3 per cent up on last year, reflecting the strong growth in jobs.

This was, however, blamed on retailers stockpiling tobacco imports ahead of the introduction of plain packaging on cigarettes.

“All major tax heads, except excise duties, are up year-on-year, reflecting the growing strength of the economy, while expenditure remains close to budget day expectations,” Mr Donohoe said.

Government spending for 2018 came in at €50.5 billion, up €4 billion or 9 per cent on 2017. Health spending came in at €625 million over budget. Some of the corporate tax windfall will be used to fill gaps in the health budget.

The budget surplus represents the fruits of hard work, but the better than expected result is “largely fortuitous”, warned KBC Bank economist Austin Hughes, highlighting the rapid growth of spending in tandem.