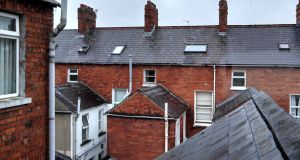 Property prices in the North rose faster than anywhere else in the UK last year, defying a pre-Brexit slowdown which saw average UK house-price growth slump to its lowest levels since 2013, a new report shows.

The Nationwide, which is the UK’s largest building society, said house prices in Northern Ireland increased by 5.8 per cent last year while the average UK house price growth was just 0.5 per cent during 2018.

Despite the strong performance by the North’s housing market last year the average price of a house by the fourth quarter in Northern Ireland was £139,599 (€155,427) which was still considerably below the corresponding UK average price of £214,178.

But Robert Gardner, Nationwide’s chief economist, said Northern Ireland had recorded a “noticeable pick-up in price growth” and had emerged as the top performing region during 2018.

“Northern Ireland recorded the strongest growth in 2018, with prices up 5.8 per cent, though Wales also recorded a respectable 4 per cent gain. By contrast, Scotland saw a more modest 0.9 per cent increase, while England saw the smallest rise of just 0.7 per cent over the year,” Mr Gardner added.

He believes there are a number of factors which contributed to the overall marked decline in UK house price growth last year.

Mr Gardner said: “It is likely that the recent slowdown is attributable to the impact of the uncertain economic outlook on buyer sentiment, given that it has occurred against a backdrop of solid employment growth, stronger wage growth and continued low borrowing costs.

“Near-term prospects will be heavily dependent on how quickly this uncertainty lifts, but ultimately the outlook for the housing market and house prices will be determined by the performance of the wider economy – especially the labour market.

“The economic outlook is unusually uncertain. However, if the economy continues to grow at a modest pace, with the unemployment rate and borrowing costs remaining close to current levels, we would expect UK house prices to rise at a low single-digit pace in 2019.”