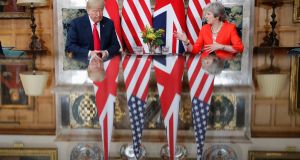 The US ambassador to London, Woody Johnson, has cast doubt on the chances of a bilateral trade deal with Britain if prime minister Theresa May manages to push her Brexit agreement through parliament. Photograph: Pablo Martinez Monsivais/AP

Britain is in need of leadership, US ambassador to London Woody Johnson said, as he also cast doubt on the chances of a bilateral trade deal if prime minister Theresa May manages to push her Brexit agreement through parliament.

“I’m feeling the country is in need of leadership,” Mr Johnson said in an interview. “You can see the frustration in the members of parliament in trying to navigate what the people wanted when they voted in the referendum.”

The ambassador’s remarks are the latest to beset an uneasy relationship between the administration of President Donald Trump and Mrs May’s government. While the UK likes to tout its “special relationship” with the US, interactions between the two leaders have been fraught.

Mr Trump said a month ago that under the terms of the Brexit deal that the UK prime minister negotiated with the EU, Britain “may not be able to trade with the US”. Mr Johnson reiterated that point. Mr Trump, he said, was “looking forward to and hoping that the environment will lead to the ability of the US to do a quick, very massive bilateral trade deal that could be the precursor of future trade deals with other countries around the world for Great Britain, that will really take you way, way into an exciting future”.

“It doesn’t look like it would be possible” under the terms of the Brexit deal on the table, he said.

“Both ourselves and the United States have said we want an ambitious trade agreement and we stand ready to do that as a priority” after Brexit, she told reporters in London.

Mrs May, who pulled a parliamentary vote on her Brexit deal because the strength of opposition to it, has pledged to hold the vote in the third week of January, but she has yet to announce any concessions from the EU that might win over recalcitrant Conservative MPs and her allies, Northern Ireland’s Democratic Unionist Party. – Bloomberg