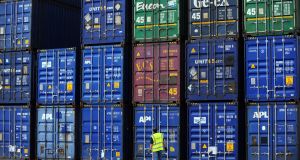 Ireland has ramped up plans to expand its diplomatic footprint as Brexit looms, with the opening of more than a dozen new missions in locations as diverse as Latin America, India, Africa, the Middle East and New Zealand. Photographer: Aidan Crawley/Bloomberg

Ireland has ramped up plans to expand its diplomatic footprint as Brexit looms, with the opening of more than a dozen new missions in locations as diverse as Latin America, India, Africa, the Middle East and New Zealand.

The biggest expansion of the State’s embassy network since it achieved independence from Britain in the 1920s is part of an attempt to forge new global markets for Irish companies.

The UK is the Republic’s biggest import partner and its second-largest export market after the US, exposing Dublin to the risk of severe economic fallout if Britain leaves the EU without a deal in March.

“Across the world we have about 80 diplomatic missions. Over the next few years that’s going to be over 100 as we expand,” said Minister for Foreign Affairs Simon Coveney.

In addition to the recently opened mission in Wellington, New Zealand, Ireland also opened missions in Vancouver, Canada, and Monrovia, Liberia in 2018. It will open another seven in 2019 – in India, Colombia, Chile, Jordan, Wales as well as Los Angeles in the US and Frankfurt in Germany. Another three missions will open in 2020 – Ukraine, the Philippines and Morocco – with a further 13 to open by 2025.

“We’re doing it at a pace that hasn’t happened since Independence and we’re having to take on a lot more staff and spend more money,” Mr Coveney told reporters.

“There’s method behind this. There’s an element of a Brexit strategy about looking for new markets to allow sectors that may have an over-reliance on the UK to be able to expand into some of these new markets.”

The Republic moved decades ago to widen its diplomatic reach beyond the power centres of London, Washington and Brussels, the traditional focus of its foreign relations. The State’s long push into China – where it has opened consulates in Shanghai and Hong Kong in addition to its Beijing embassy – is the “template” for the latest expansion, Mr Coveney said.

“Six or seven years ago when I went to China we were selling less than €100 million worth of food. We’re now selling €1 billion worth . . . China is now the third-largest market for Irish food and drink. That shows what can be achieved in five to seven years. That’s all it’s taken.”

Despite Brexit, Mr Coveney said Dublin was determined to continue working closely with London. The two governments plan an annual joint conference involving “significant numbers of ministers on both sides”, similar to Franco-German cabinet meetings and joint meetings of Spanish and Portuguese ministers.

“I think that is the kind of structure that is needed to replace all of the meetings that we have in Brussels at the moment, where British and Irish ministers meet regularly. So we will work hard to make sure that our closest neighbour and the country that has and continues to have the most influence on Ireland – both historically and in the future – will stay close.”

Brexit has also led Dublin to forge new links with pro-trade Nordic and Baltic EU states, who have clubbed together in an informal alliance to pursue common cause on euro zone reforms and fiscal questions.

As a foil to rising uncertainty over Brexit, the Republic is intensifying efforts to capitalise on Europe’s new trade deals with Japan and Canada. Although the State has long put foreign direct investment from the US at the heart of its economic policy, Mr Coveney said the appetite for investment in Ireland from Canada had “dramatically increased” since the Brussels-Ottawa trade pact, known as Ceta. – Copyright The Financial Times Limited 2019