Chris Johns: Robots could liberate us to be more creative at work

We should embrace technology to make our working lives more productive 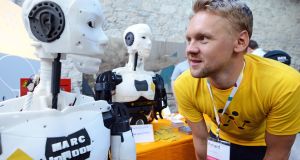 Warnings about the threat posed by robots and artificial intelligence (AI) to all of our jobs are everywhere. Even Taoiseach Leo Varadkar has recently been minded to suggest that doctors – but not politicians – need to watch out.

The story is by now familiar: mechanisation first seriously displaced both horses and human labour in the 19th century. The pace of these changes is accelerating, with one big important new feature.

Automation used to be something only unskilled workers should worry about. Today, computers can write newspaper columns and drive heavy lorries: the Taoiseach reminded us that 16 per cent of Irish workers rely on driving in some form or another for employment.

Few jobs are immune. Some analysts think that the decline in young adults studying humanities, in favour of anything that involves computer code, is being driven in part by fear over employment prospects.

Estimates vary but organisations such as the OECD and economists at Oxford University have guessed that roughly half of all occupations could sooner or later be done by robots. The truth is nobody really knows.

Noah Smith, an economist with Bloomberg, points out that the impact of AI could be both subtle and more benign than the headline estimates suggest. It could be, for instance, that only part of a job is replaced, freeing the worker to increase productivity in the bit that is still left for him or her to do.

ATMs, for instance, didn’t have the employment impact that everyone expected for banks. In the United States, while jobs per branch bank fell, the number of branches increased. Similarly, again in the US, technological innovation at the checkout nevertheless has seen supermarket jobs essentially stable this century.

All of the jobs that people did 100 years ago have, already, experienced some degree of technological disruption. Lots of today’s jobs did not exist back then. But even if they did, previous generations of teachers, nurses, train drivers, lawyers and accountants had a very different daily work routine compared with their modern counterparts.

Little of what people are worried about today is anything new. Yes, jobs are lost to robots and this is a big problem for the older worker and/or those less willing or able to either retrain or move to find job.

Dani Rodrick of Harvard University has long argued, convincingly in my view, that the disruption caused by both technological change and globalisation has been poorly handled by policymakers. Much more could be done to help those affected. Populism is, on this analysis, a direct result of abject policy failure.

The intriguing thing about this familiar debate is that robots provide many a scare story but are nowhere to be seen in the jobs numbers – at least not in the sense that AI threatens mass unemployment.

If workers are being displaced they are clearly finding jobs elsewhere. And if AI is a real and present danger it should, by now, be showing up in the productivity numbers: machines should be far more productive than people. So far at least, this is a dog that has failed to bark.

Take last Friday’s US employment report. Economists were stunned by a headline jobs number that was far in excess of what they thought likely. Wages were also up by more than expected. As one senior Federal Reserve official said, just when we thought we had reached full employment we find that we were wrong.

The US economy continues to be a job-creation machine and the workers are still there, somehow, to fill the increased vacancies. Make no mistake, job creation and wage growth on this scale, if maintained, is a recipe for a second Trump term: the numbers really were that good.

It’s not just in the US where robots have, so far at least, failed to make the expected impact on headline unemployment. The UK economy, sluggish growth notwithstanding, also continues to generate jobs at a rate that surprises just about everybody. In Ireland, we hear talk that full employment is edging ever closer – with all of the dreary overheating worries that, it is commonly supposed, will quickly be realised.

Far from creating mass unemployment, AI will free us up to be more creative and more productive. Think about the sheer drudgery – if not danger – involved in most of the jobs that our grandparents did.

Anthropologist David Graeber disagrees: he had his five minutes of fame recently with the idea that most of us do worthless, “bullshit”, jobs that, when combined with our tendency to equate self-worth with productive employment, leads to mental ill health.

Working for a living may not be a bundle of laughs but is, today, unrecognisable compared with the jobs of a generation or two ago. One of the paradoxes of the modern age is that despite all the automation and proliferation of computers, many of us work longer hours than ever.

Especially in the what Graeber might call the “non-bullshit jobs”. That might be because we all need to pay the mortgage. It might also be because, freed from mind-numbing routine, some people actually enjoy their technologically-enhanced work.