Digicel’s assets sale, Apple ‘is committed’ to Ireland and the EU’s copyright own-goal 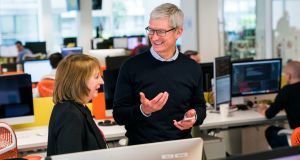 Apple CEO Tim Cook in Dublin. He says the company ‘is committed’ to Ireland.

Businessman Denis O’Brien’s telecoms group Digicel is planning to raise as much as $500 million from asset sales in the next nine months in order to lower its debt burden, according to market sources, reports Joe Brennan.

A data analytics and anonymisation company founded by IBM and Mastercard has chosen Dublin as the location for its headquarters where it plans to hire up to 75 staff this year. Peter Hamilton has the details.

The latest instalment of the Panama Papers from the International Consortium of Investigative Journalists reveals the offshore secrets of Lionel Messi and charts the fall of Mossack Fonseca.

AIB chief executive Bernard Byrne will tell the Oireachtas finance committee on Thursday that the bank has had to hold additional capital on its balance sheet as a result of its recent history of defaulting borrowers – and that the cost is ultimately borne by customers, reports Joe Brennan.

“We are committed,” says Apple CEO Tim Cook on the global behemoth’s attitude to Ireland. Ciara O’Brien met him during his visit here.

Karlin Lillington’s weekly column is on how the EU is getting it wrong when it comes to online copyright reform.

Japan’s banking sector is labour intensive, says David McNeill, but the cold wind of change is starting to blow.

Resident sage Cantillon looks at the latest employment figures, ponders whether Fox News is damaging the brand and tells us that the arrest of Audi’s chief executive Rupert Stadler puts the VW diesel emissions scandal back in the spotlight.

Blockdaemon, a Brooklyn-based start-up whose backers include telecoms giant Comcast, is to establish an office in Galway. Charlie Taylor reports.

Dairy farming is not known for its bleeding-edge tech but facial recognition for cows is happening . Charlie Taylor meets David Hunt, CEO of agritech start-up Cainthus.

Innovation columnist John Holden argues that we can’t keep living on our past scientific reputation.

Ciara O’Brien reviews the Bang & Olufsen Beoplay speaker, which comes in at cool €400.

Stay up to date: sign up to our business news alerts and our Business Today daily email news digest.