VW emission cheating: Who knew what and when? 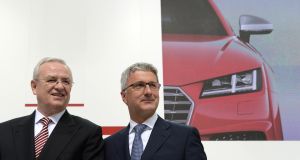 The arrest of Audi’s chief executive Rupert Stadler puts the VW diesel emissions scandal back in the spotlight and underlines the over-riding question of all the investigations underway at present: who knew about the cheating, and when did they find out?

It also underlines the ongoing concerns over corporate governance at the car giant.

To recap, the scandal came to light in September 2015 when the US Environmental Protection Agency issued a public notice alleging that between 2009 and 2015 VW Group fitted certain new diesel engines with so-called “defeat devices” designed to cheat US emissions tests. Further investigations revealed the extent of the scandal: VW admitted 11 million vehicles were affected worldwide across its Skoda, VW, Audi, Seat and Porsche brands.

Since then various criminal investigations have been launched and several VW engineers have been charged in the US, with two serving prison sentences. The aim of the investigations, including those by the German authorities, is to identify whether the cheating was sanctioned by executives at the top of the car company.

The US Department of Justice has made clear its view on the matter, saying the scandal “went all the way to the top”. It is prosecuting former group chief executive Martin Winterkorn. While he is not accused of being involved in planning or instigating the fitting of the cheat devices, the claim is that he allegedly knew about it as early as May 2014.

VW has acknowledged Mr Winterkorn received a memo about the affair in May 2014, but it says the description of the diesel irregularities was written “selectively, briefly, and in an undramatic manner”. Likewise, VW denies that any criminal intent was declared at a July 27th 2015 meeting attended by him, which included a PowerPoint presentation on “how VW was deceiving US regulators, including precisely . . . what information had not yet been disclosed [and] the potential consequences of VW being caught.”

Since the scandal broke, Audi’s Rupert Stadler faced numerous calls to step down. VW has not just defended him; last year it promoted him to head of a new “premium” cars division. Even this week, the company’s top directors could not bring themselves to dismiss Stadler, instead appointing an interim replacement.

In the background to all this is a German case where investors are seeking €9 billion in damages, reflecting cumulative losses incurred by 3,600 claimants after details of the cheating devices were revealed and the company’s stock nearly halved.

The whiff of the diesel scandal continues to linger at VW Group, even as it attempts to reinvent itself with a multi-billion-euro investment in an electric future.