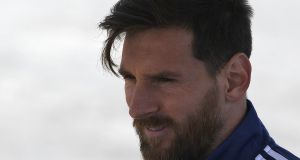 Argentina captain Lionel Messi ahead of training at the team’s World Cup base camp in Bronnitsy, near Moscow. Photograph: Juan Mabromata/AFP/Getty Images

The documents also show Mossack Fonseca scrambling to contain the fallout from the leak and identify its own clients.

The 1.2 million documents date from a few months before April 2016, when the International Consortium of Investigative Journalists and more than 100 media partners published the initial Panama Papers stories, and continue through December 2017. The documents were leaked to Munich-based Süddeutsche Zeitung, which shared them with ICIJ.

Mossack Fonseca’s founders, Jürgen Mossack and Ramón Fonseca, issued a press release in June that said the law firm, its employees and its founders were “never involved in unlawful acts”. They did not respond to requests for comment for this story.

In the coming days, ICIJ partners in dozens of countries will publish stories based on the new batch of Panama Papers files. Those stories will shed new light on the financial dealings of people from the first investigation and connect other influential and politically-connected people to the firm.

Here, in brief, are some of the findings:

Barcelona star Messi, was already under investigation in Spain on charges that he and his father, Jorge Horacio Messi, used offshore companies in Belize and Uruguay to avoid paying millions of dollars in taxes when the Panama Papers revealed he owned yet another offshore company: Mega Star Enterprises, based in Panama.

When asked about the company in April 2016, the Messis told ICIJ and partners that Mega Star was “totally inactive”. Internal emails from the newly-leaked Mossack Fonseca records call that claim into question.

The “Uruguay office tells me that the client is using the company,” a law firm employee wrote in May 2016, a month later. Mossack Fonseca resigned as the registered agent for Mega Star Enterprises in July 2016, the documents show – the same month the Messis were convicted by a Spanish court of tax fraud. Lionel was given a 21-month suspended sentence and fined about €2 million.

A lawyer for the Argentina captain told Spanish newspaper El Confidencial, an ICIJ partner, that Mega Star Enterprises was an old issue and was part of the former corporate scheme that had already been adjudicated. The company is not being activity used, the lawyer said.

Emails between Mossack Fonseca’s head office in Panama and its Uruguay branch in September and October 2016 show employees discussing a plan to backdate documents to conceal the fact that the firm did not know that a company it had set up in the Bahamas, Fleg Trading Co, was controlled by the family of Argentine president Mauricio Macri.

Mr Macri and other family members were directors of Fleg Trading, the original Panama Papers investigation revealed. His father was the owner. Anti-money-laundering laws required Mossack Fonseca to know such information.

Mossack Fonseca employees discussed having Mr Macri’s accountant produce a handwritten document in 2016, but dated years earlier, that would confirm the company’s owner, according to emails. The accountant dismissed the idea as “very risky” since the letter “could be refuted easily by an expert calligrapher,” who would pick up that the document was written more recently than the purported earlier date, according to Mossack Fonseca’s internal emails.

The client did not want to “gamble”, the emails said, “since there is the president of Argentina and his family involved”.

The new files also show that Mossack Fonseca did not know of the Macri family’s connections to BF Corporation, another shell company. BF Corporation was owned by Mr Macri’s brothers, Mariano and Gianfranco, according to Argentine press reports. Those reports have noted that German prosecutors alerted Argentine authorities in 2016 about suspicious transactions involving BF Corporation based, in part, on revelations from the Panama Papers investigation. The transactions occurred days before the October 2015 first round voting that led to the president’s election the following month.

A spokesman for the Macri family’s company, Socma, told ICIJ media partner La Nación that the president’s father declared his ownership of Fleg Trading, which was confirmed by a judge in Argentina. The spokesman said he had no information or comment on the discussions between Mossack Fonseca and the Uruguayan accountant.

Politicians linked to missing millions in Malaysia, Kuwait and Russia

In March 2017, Mossack Fonseca discovered that a company it had registered in the British Virgin Islands was owned by Mohamed Nizam bin Abdul Razak, the brother of Malaysia’s former prime minister, Najib Razak. The company, Everbright Universal Holdings Ltd, owned property in the US, according to the files.

Najib Razak, who fell from power after his party lost parliamentary elections in May, is now under scrutiny as part of an investigation into billions of dollars found missing from the country’s state-owned investment fund during his tenure. A focal point of the investigation has been $10.6 million that was transferred into a bank account owned by the former prime minister. Najib Razak denies wrongdoing.

The new files also reveal a company registered by Mossack Fonseca was owned by Fahad al-Rajaan, the former head of the agency that oversees Kuwait’s social security system. Al-Rajaan was convicted in absentia in 2016 of embezzling up to $390 million (€336m). The files show he owned Tawny Real Estates Ltd, which in turn owned a Macau apartment and a Swiss bank account. Al-Rajaan was arrested in Britain in April 2017, but Mossack Fonseca was still the registered agent as of November 2017, despite learning of the allegations against him in March 2016.

Also named in the new files: Vitaly Malkin, a Russian oligarch who resigned a seat in Russia’s senate in 2013 after reports that he had undeclared assets overseas. Mr Malkin appears as the owner of two British Virgin Islands companies, Audrey Holdings Group Ltd and Top Matrix Holdings Ltd. Audrey Holdings Group held Swiss bank accounts worth $200 million, according to Mr Malkin’s source of wealth file compiled by Mossack Fonseca. Mr Malkin did not respond to a letter delivered to his Luxembourg address.

The newly-leaked files reveal a bevy of other celebrities, politicians and alleged criminals whose links to Mossack Fonseca have not been reported – and, often, that the firm itself did not know it represented.

In July 2017, Mossack Fonseca learned that Panama shell companies it had set up were controlled by heirs of French jeweller Pierre Cartier. The companies owned a Canadian forest and Swiss bank accounts, according to the new documents.

Members of the Cartier family did not respond to requests for comment. The heirs’ financial adviser declined to answer questions from ICIJ media partner Le Monde.

Dariga Nazarbayeva, a former deputy prime minister, is a senator who heads the Kazakh senate’s Committee of International Relations. Her political rise is viewed by some Central Asian politics watchers as an indication she may one day replace her father.

In October 2007, Ms Nazarbayev became a shareholder of Asterry Holdings Ltd, which held a stake in sugar factories in Kazakhstan, via a chain of other companies, according to ICIJ partner OCCRP, a media consortium in eastern Europe.

Ms Nazarbayeva did not respond to requests for comment.

Another company set up and managed by Mossack Fonseca was owned through a trust by Israel Perry, the new papers show. Perry, who died in 2015, was an Israeli attorney convicted of defrauding other Israelis, most of whom were Holocaust survivors. The firm only learned of Perry’s ownership of the company, called Mallett Ford Inc, through a lawsuit brought against it, according to the documents.

None of the Mossack Fonseca correspondence found in the new leak mentions that Perry was a convicted criminal, and it is not clear whether the firm knew.