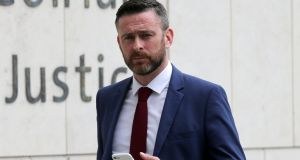 The Court of Appeal has increased six-fold the fine imposed on a man convicted in the first successful bid-rigging prosecution in the history of the State.

The Director of Public Prosecutions had sought an increase in the sentence given to Brendan Smith, a former carpet company manager. He was convicted at the Central Criminal Court last year of fixing prices of contracts on flooring for the headquarters for multinationals, including Google, Mastercard and Paypal.

Smith, of Greenane, Dunshaughlin, Co Meath, pleaded guilty and was fined €7,500 and received a three-month suspended prison sentence, as well as a five-year disqualification as a director. The case was taken by the Competition and Consumer Protection Commission (CCPC) following a major investigation.

The DPP last month appealed the sentences of both Smith and Aston Carpets, the company he managed. It was also convicted and fined €10,000. The State requested an increase in the sentences to encourage whistleblowers.

In a judgment delivered on Wednesday morning, Mr Justice Alan Mahon said the fine levied on Smith was “unduly lenient” and increased it to €45,000. The judge said the fine needed to be increased to reflect the fact that Smith was the individual in control of the “criminal behaviour”.

“[He] effectively orchestrated [the bid-rigging] and indirectly stood to benefit,” said the judge.

The court declined to adjust Smith’s suspended three-month prison term, which it found was “reasonable and proportionate”. It also left the fine on Aston Carpets untouched.

The court gave Smith six months from Wednesday to pay his fine. He declined to comment afterwards on the decision to increase his punishment.

Smith’s trial last year heard he had rigged several tenders in 2012 and 2013 for multinational clients with a rival company. The average price of the flooring contracts was €137,000.

The court heard that Smith regularly met co-conspirators in city cafés to collude on the prices each would bid for upcoming contracts, essentially carving the work up between them.

The court was told of evidence of bid-rigging entered into by Smith for 16 separate contracts over a two year period. On these occasions, Smith and Aston Carpets colluded with David Radburn of Carpet Centre (Contracts). The two companies were then the two biggest in the market.

Carpet Centre won about €617,000 worth of multinational flooring contracts during the collusion, while Aston Carpets won €758,000. The court also heard that, at the time, Smith had a cocaine problem.

The full extent of the bid-rigging scheme was eventually exposed when Mr Radburn turned whistleblower. He received immunity from prosecution and co-operated with the CCPC, which led a four-year investigation into the matter. The investigation was revealed in its early stages in The Irish Times in 2013.

The CCPC on Wednesday welcomed the sentence increase, and said bid-rigging leads to higher costs for businesses and consumers.

1 In this strangest of recessions, what happens next for Ireland?
2 Bank of Ireland sees about 2,000 staff apply for voluntary redundancy
3 Estée Lauder staff at Dublin airport plan further strike action
4 Overhaul of lease arbitration regime would be a game changer for retailers
5 Michael O’Leary is the boss you want to lead an airline out of crisis
6 Period of ‘extreme stress’ beckons for Irish businesses
7 Legal tech company Brightflag raises €7m in new funding round
8 What agriculture can learn from Charles Darwin
9 Five-star hotels scramble to retain luxury experience under new anti-virus regime
Real news has value SUBSCRIBE