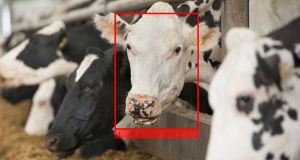 Irish agritech start-up Cainthus made business headlines around the world earlier this year after it emerged it had received financial backing from one of the largest privately held corporations in the United States.

That it caused a stir wasn’t too surprising as the company has developed something unlikely-seeming: facial recognition technology for cows and other livestock. More unexpected? Hearing founder and chief executive David Hunt talking down what Cainthus does.

“What we are doing isn’t really that innovative. We are levering technologies that are proven and robust in other areas, and applying them to agriculture,” he recently told attendees at First Fridays for Startups, a monthly event for entrepreneurs that takes place at Dogpatch Labs in Dublin.

A plain speaker if ever there was one, Hunt is also matter-of-fact about the current state of play in agriculture and how this has proven to be fertile ground for start-ups such as Cainthus.

The entrepreneur told attendees about a McKinsey report from a few years ago that ranked it as the least digitised industry in the world.

“Digitisation was so lacking in agriculture when we started out that it provided a tremendous opportunity for technology transfer,” he said.

As Hunt sees it, a much-needed tech revolution is afoot in agriculture.

“The rate of change we are going to see in the next 10 years is going to be the equivalent of what we’ve seen over the past 30 years combined. This is terrifying, but also wonderful in terms of opportunities,” he said.

Change is necessary, because the global industrial agrifood sector is broken, the businessman added. As a former managing director of Comex McKinnon, the Irish cereal importer and exporter which posted €137.9 million in revenues in 2017, Hunt should know.

“I was buying grain all over the world in my previous role and what I came to realise is that very few people have a clue what is going on in the sector because things simply aren’t being measured.

“We felt there was a major commercial opportunity to build digital measurement sensors that would be affordable to the average farmer and easy to use. Our logic was that data-driven decision-making as opposed to relying on heuristics and observation is more efficient,” he said.

Hunt says agriculture today is effectively where the energy sector was 40 years ago in that there is a realisation things have to change but that we’re a way off getting where we need to be.

“We are effectively trying to buy time to enable us to transition to a new agricultural system that is scalable on demand without destroying the planet in the process,” he said.

“Where we are now is effectively where energy was back in the 70s. We could tell the future was going to be a combination of solar, other renewables and nuclear, but we had to make the fossil fuel system more efficient to buy us time to get to that future.”

Technology is, as he sees it, the means to ensuring the sector gets to a better place. Cainthus, along with the likes of MooCall and MagGrow, are among a number of well-regarded Irish agritech start-ups that are making waves across the world with their smart solutions.

Cainthus uses predictive imaging to monitor the health and wellbeing of livestock. Its proprietary software uses images to identify individual animals based on hide patterns and facial recognition, and tracks key data such as food and water intake, heat detection and behaviour patterns. The software then delivers analytics that drive on-farm decisions that can impact on milk production, reproduction management and overall animal health.

Data gleaned from those images is used to anticipate issues and adjust feeding regimens, meaning that what used to be a manual process that took days or weeks, now takes place in near real-time.

That Cainthus’s solutions are in demand is obvious. Hunt revealed that at least one big technology company has already sought to buy the start-up while it also turned down a €10 million financing offer a few years ago on the grounds that it didn’t need all the money and would be selling itself short by taking it.

Hunt told First Friday attendees that when it went for funding last year it had three offers from top-tier VCs on the table but then Cargill, one of the largest privately-held corporations in the US came calling.

In addition to taking a minority stake in the Dublin-based machine vision company, Cargill also agreed a strategic partnership with the start-up to bring its groundbreaking technology to dairy farms across the world.

“They can open doors we never even knew existed. Route to market is the single hardest thing in agritech and Cargill has seven million cows in its network. It made sense to partner with them and the company says it has already made its money back on the investment due to the publicity it got from teaming up with us,” he added.

Talking of publicity, the businessman poured scorn on wannabe entrepreneurs who like the limelight a little too much. He cast doubt on how many start-ups have really raised capital from bumping into investors at events such as Web Summit, and how they can afford the time to party if they are trying to build a business. He also made it clear he had little time for those who promote such individuals.

“Most entrepreneurs do not realise that they are much more useful to the media than the media are to them,” is how he put it.

The businessman advised budding entrepreneurs not to rush to take money from investors, outlining how he and his brother Ross (Cainthus’s chief finance officer) largely bootstrapped the business.

“I didn’t pay myself a salary for the last 2½ years and even last year I only paid myself for three of four months because if it is a case of do I pay myself or hire an engineer, I’m choosing the engineer every time,” he said.

“Bootstrap and take as little money as you can until you get to the point where you are ready to go commercial. That is when you’re most attractive to investors,” Hunt added.

The entrepreneur also urged start-ups not to limit themselves to their home territory, either for funding or as a market.

“One of the irritations I have is Irish people trying to solve problems that only impact here and nowhere else. I also see a prevalence of the country being used as a first market because of an accident of birth rather than because it is the best place to start.”

Hunt goes on to say that people should only start a company if there are good reasons for doing so, adding that instead of being glamorous, the life of an entrepreneur can be lonely and dull.

“Can you find a problem affecting the world that irritates you enough that you’re willing to abandon all you know, and start a company and bully and cajole people into joining you to solve that issue? You need to have single-minded dedication,” he said.

“Most successful entrepreneurs are freaks and weirdos and they succeed because of this. However, the skills that will help you turn a start-up into a success are the exact same ones that will get you fired when it becomes a full-blown company, “ Hunt concluded.