Innovation Talk: We can’t keep living on our past scientific reputation 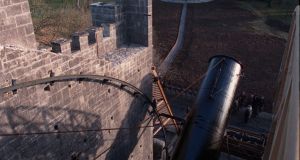 Birr Castle: A decade later and I-Lofar is up and running now for almost one entire earth year, testament to the unwavering determination its supporters. Photograph: Liam Burke/Press 22

We can’t keep dragging up the late, Irish laureate Ernest Walton’s name every time Ireland’s scientific reputation is somehow considered under threat. CERN is no different.

If all it takes to become a CERN member is throwing in $1 million, then why join? Sounds more like a Ponzi scheme to this reporter than an honourable scientific enterprise. Not to mention a distraction from more important questions. Like why we aren’t able to compete with the Chinese Academy of Sciences in terms of international research rankings?

Okay we all know ranking polls are wishy washy affairs. But you’d like to think The Nature Index, a scorecard collated by one of the world’s most respected science journals, is worth looking at.

Taking a stab at scoring not just institutions but entire nations based on author affiliations for around 60,000 scientific articles published annually, the Nature Index focuses on citations in leading academic journals such as Science and its namesake Nature. Editors count the number of times each institution’s authors appear in certain journals, adjusting for co-authorship.

There were few surprises in the main categories for both top-ranking countries and institutions in this year’s Index. Harvard, MIT, Cambridge and the Chinese Academy of Sciences (CAS) all feature prominently.

In fact, the CAS took the top spot from Harvard for the first time in three years as they earned recognition as the best place on planet earth to get your geek on. Of the ten institutions that dominated science in the 2018 rankings, four were American, two were German, while the Chinese (No 1), British, Japanese and French took home accolades too.

None of Ireland’s institutions made it into this exclusive club, a membership I’d be far more interested in applying for than simply paying to get into CERN.

If throwing all your eggs into one citation-weaved basket seems too narrow a metric, QS World University Rankings were also released recently (a ranking system that takes into account academic and employer reputation, faculty/student ratio, International faculty/Student Ratio as well as citations.) Although Ireland dropped completely out of the Top 100 here so . . . you say tomato, I say citation.

When you’re smaller than your opponent – both in size and strength – there is no point being all Scrappy Doo about it and shouting ‘Lemme at ’em, Le’mme at ’em!’ until your tiny respiratory system fails before you even make it to the ring.

According to the Nature Index, Ireland made plenty of progress in specific research areas. It ranked 10th globally for overall scientific research quality. Ireland also ranked in the top five in areas such as nanotech, animal, dairy & agricultural sciences, chemistry, immunology, materials science, and even maths.

Surely this means some aims of public policy, or the ‘knowledge economy’, are being realised as several of these sectors were earmarked eons ago as potential drivers of Irish scientific leadership. Particle physics, on the other hand, was not considered as much of a priority and therefore CERN hasn’t been top of the ‘to do’ list.

This reporter wrote about the I-Lofar (Irish Low Frequency Array Telescope) project at Birr Castle Demesne) for The Irish Times back in 2011.

This initiative aimed at raising the public funds needed to join a network of interconnected European radio telescope stations. All they wanted was a paltry €1 million too. A decade later and I-Lofar is up and running now for almost one entire earth year, testament to the unwavering determination its supporters.

Given its location beside Birr Castle's Leviathan telescope - the world's largest until 1917 - understandably, this historic scientific achievement formed a big part of the case in favour of joining the European-wide Lofar network.

But that doesn’t mean we should keep dragging up the past every time Ireland’s scientific valour is brought into question. Especially when it overshadows current successes in other areas.

The world’s leading scientific research institution, according to Nature, is the CAS in Beijing. It is the new model of best practice for Ireland and the rest of the world’s scientific community. But it also comprises 114 institutions with 60,000 scientists on site.

That’s just under half the total number of students who will enroll in any kind of university programme in Ireland this year. The cards are not stacked in our favour. It won’t help constantly reminding everyone at the table about the great hand we were dealt earlier in the game either. If anything we just won’t be invited back to play.