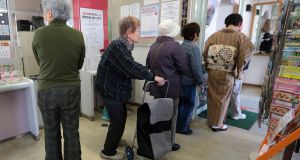 The Financial Services Agency (FSA) in Japan is reluctant to push too hard, for reasons what will be familiar to Irish readers. Many banks provide a lifeline to ageing communities and help prop up tottering companies

The history of the ATM includes a footnote in Asia: a Japanese company supposedly developed the first cash machine in the mid-1960s. Japan’s record of remarkable innovation is not apparent, however, when you enter its high street banks. Most have hardly changed in years, employing concierges to welcome customers and neat rows of uniformed tellers to help them. Transactions are concluded with carved signature seals stamped on paper contracts.

Commercial banking across the rich world is being hollowed out. Britain loses about 300 branches a year. Banks have abandoned the centre of many Irish towns; the Bank of Ireland, the nation’s biggest network, may be about to swing the axe on its 250 branches. The traditional bank manager, says one recent report, is an endangered species. Yet Japan still has one of the most labour intensive and crowded banking industries on the planet.

High-income countries have on average 17.3 commercial-bank branches per 100,000 adults, according to the World Bank. Japan has 34.1. Throw in the neighborhood post office, where millions of Japanese families stash their nest eggs and it is among the most overbanked countries in the world, says Shinobu Nakagawa of the Bank of Japan (BOJ). “Everyone realises that something has to be done.”

The BOJ sounded the alarm last autumn. Too many overstaffed branches are worsening “strikingly” low profitability, it says in its latest report. Return on assets for the last financial year was 0.3 per cent, compared with 0.8 per cent for UK banks. Over half of the nation’s regional banks are losing money on lending and fees, their core business “The entire banking system has to drastically shrink,” concludes Naoyuki Yoshino, dean of the Asian Development Bank Institute, a think tank.

The BOJ itself is partly to blame. By driving down interest rates as part of the government’s war on deflation, it has shaved lending margins to the bone (banks borrow at low interest rates and invest at higher rates, keeping the difference). But the industry’s problems run deeper. Across the country, companies are shutting or relocating abroad, robbing regional banks of once captive core clients. Demographics are eroding their customer base.

After some foot dragging, Japan’s big three, MUFG, Sumitomo Mitsui and Mizuho, last year announced the closure of hundreds of branches and the elimination of 32,000 jobs between them in the coming decade. Mizuho will shed a quarter of its workforce. MUFG says it expects to replace thousands of employees by automating many of its branches. All that sends a signal to the rest of the industry, says Mr Nakagawa. “A wave of consolidation is coming.”

Japan’s megabanks will be fine, says Masamichi Adachi, a senior economist at JP Morgan Securities. After two decades of consolidation, they have the muscle to fight for business abroad. The bigger issue is the country’s 105 regional banks, which are tethered to the domestic market. Together, these account for about 40 per cent of Japan’s loans, roughly the same as the big financial groups. Shrinking local populations mean hundreds of towns and villages may disappear in the coming decades. What will happen to their banks?

The Financial Services Agency (FSA), their regulator, is reluctant to push too hard, for reasons what will be familiar to Irish readers. Many banks provide a lifeline to ageing communities and help prop up tottering companies. Banks must tread carefully too: It is elderly customers who most appreciate the fussy service of traditional banking, and who resist going online. In response, some local banks have started to deploy mobile ATM vans – basically high-tech banks on wheels. “This is how they will solve their problems,” predicts Mr Yoshino.

The FSA is urging banks to offer more funding to start-ups and smaller firms. It hopes that would stimulate economic growth and help the banks themselves, by creating new, profitable clients. But nudging risk-averse banks away from calcified business practices while trying to avoid a major shock to the system is a tricky line to tread. A wave or mergers seems inevitable. The Trade Commission, which regulates competition, has approved 15 regional bank mergers in the past decade and the pace is accelerating.

The real disruptor will be financial technology (fintech), predicts Noriaki Maruyama, president of SBI Sumishin Net Bank, an online bank. Japan’s love of bricks-and-mortar banks has kept digital upstarts at arms length. Neighbouring China, by contrast, is one of the world’s biggest markets for digital payments, and is set to overtake America by 2020. A single Chinese company - Ant Financial – has a whopping 500 million domestic customers. “The fact that China had fewer high street banks was an advantage to the rise of net banking,” says Mr Maruyama.

SBI Sumishin is leading the digital charge. The bank’s stripped down operation means it operates at a fraction of the cost of its bigger rivals. It has shaved interest rates on home loans to 1.17 per cent a year, compared with an average for major banks of 1.28 per cent, by streamlining operations (using artificial intelligence to process loan applications, for instance). Set up a decade ago by SoftBank Group and Sumitomo Mitsui Trust Bank, the bank has quickly become Japan’s most popular mortgage lender.

Mr Maruyama says this is only the start. The expensive front-office clutter of high-street banks can be striped away, leaving only ATMs. Most transactions can be done on mobile phones, he says. He is hardly the only one with this vision. Ant Financial has recently set up an office in Tokyo. Line, a messaging service with 73 million users in Japan, wants to expand into financial services. Mr Maruyama says he is unfazed by the prospect of more competition. Whoever succeeds they have to be both fleet-footed and attuned to Japan’s cosseted consumers. “It’s not an easy balance to achieve.”