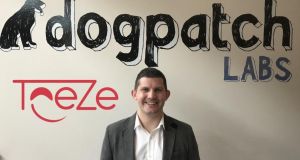 Teeze founder Noel McKeown says the company has global ambitions “but our initial focus will be on Ireland and the two million singles in this market”.

The low conversion rate between online matches and face-to-face meetings is the gap being targeted by new dating app Teeze, which was set up at the end of 2016 by software developer and former telecoms consultant Noel McKeown.

“Mobile dating can be an egocentric, superficial and low-action landscape and 90 per cent of matches on mobile dating do not result in a meeting,” he says. “Things tend to get really awkward around date proposals. People are afraid of rejection or their ego taking a hit. There is no easy way of moving a digital relationship to that first date and these factors are contributing to app fatigue and churn rates.

“We believe the future of dating goes beyond the initial match and Teeze is all about making it much easier to set up dates that actually get people together,” he adds. “Existing apps concentrate on making the connection; we focus on what happens after interest is established. Our aim is to be the world’s leading dating app in the after-match experience.”

McKeown has been active in the dating app space since 2014. At that time he was working in Australia, where he launched a dating site aimed at the large expat community. “It was a slick site but the technology had rapidly shifted to mobile, so I took the concept and repackaged it,” he says. “This led to Teeze, which was developed and tested throughout 2017 and soft-launched in February of this year.”

Teeze is aimed primarily at millennials but is open to all and free to use. The company will make its money from three revenue streams: advertising, competitively-priced and variable premium features and exclusive mentions for possible meet-up venues.

Teeze suggests potential matches based on stated preferences, gender, age and location. Matches are presented in scroll fashion to make it easier to browse pictures and profiles. To take things to the next stage Teeze suggests dating options (coffee, cinema, zoo, bowling, etc) and uses Google maps, Yelp and Foursquare to identify venue options in the immediate area. Each part of the decision-making process is encouraged by consistent, easy to follow graphics designed to help people say “yes” or “no” to a date with ease and minimum awkwardness.

Teeze has a lot of competition, including Tinder, Bumble and Plenty of Fish, but McKeown is sanguine about it. “It’s competitive but also highly lucrative,” he says. “We looked at all these apps in our UX design and they helped us develop something that is unique and can break the market. The extra layer of connectivity that Teeze offers is unrivalled.”

McKeown estimates the cost of developing the app’s three platforms (iOS, Android and online) at about €150,000 had he been paying someone to do it. However, with help of friends, the platforms were designed over an intensive six-month period and coded over the next 2½ years. During this time McKeown self-funded the bootstrapped venture to the tune of about €25,000 and was also supported by the New Frontiers programme at the LINC at Blanchardstown IT. The company has a team of five and is headquartered at Dogpatch Labs.

“Online dating is a global, billion-dollar industry and the highest-grossing app in the world is a dating offering. We have global ambitions but our initial focus will be on Ireland and the two million singles in this market,” says McKeown.

The company’s next step is to raise €50,000 in an initial seed round and McKeown is about to replace himself as chief executive. “I am a tech person and feel the company needs someone with commercialisation expertise to take us to the next level,” he says. “We have advertised the position and have been very impressed by the calibre of those applying.”