Apple has been in Ireland since 1980, but loss of Athenry data centre still fresh in people’s minds 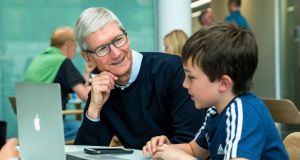 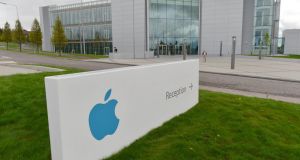 “We are committed.” That was the message Apple chief executive Tim Cook wanted to hammer home when he visited Ireland this week.

That may well come as either no surprise or a welcome relief to Apple’s 6,000 employees in Ireland, depending on how optimistic they are about the company.

Apple has been in Ireland since 1980, but with the recent loss of a €850 million data centre in Athenry, Co Galway, still fresh in people’s minds, plus the €13 billion tax judgment from the EU, you would forgive people for thinking the relationship may have taken a downward turn.

Yet, according to Cook, Apple is still as committed to the country as it has ever been. “Honestly speaking, we didn’t come to Ireland for tax. We came to Ireland in 1980 because we saw a community we thought we could grow, and could do a number of things to support the continent. We’ve stayed on course on that over almost four decades. It hasn’t been a straight line – life isn’t a straight line, things go up and down – but it’s always been in a trajectory that is increasing. I don’t anticipate that changing. ”

It’s not just about direct employees anymore. Apple has more than 300 suppliers across Ireland. Last week Apple revealed the App Store’s contribution to employment. It’s hard to believe that a decade ago the iOS App Store didn’t exist. Today it supports 1.5 million jobs across Europe, with 17,000 in Ireland.

The number of jobs has increased 28 per cent across Europe in the past two years. Around €20 billion has been paid to European app developers since the App Store was created, which is a decent sum by any standard.

Those 17,000 app developers in Ireland put the country 12th in Europe in terms of app economy jobs as a percentage of all jobs on the Irish market, and the 19th largest iOS App economy, according to Apple’s figures.

“It’s a phenomenal change that really is only a decade old. Someone can sit in their basement or in their home, and with the push of a button all of a sudden it can be selling in 155 different countries. It’s unbelievably empowering,” said Cook. “It’s one of the largest job segment growths in the economy in most countries in the world.”

Of course in Cork, things are a little more established. The company has a heritage that spans almost four decades. It is home to the company’s only wholly-owned manufacturing facility in the world, where it provides “configure-to-order” iMacs for customers across Europe, Middle East and Africa. It also hosts support and service teams for customers in Europe, the Middle East, India and Africa.

In total, Apple employs 6,000 people in Ireland, with most of them based at its Cork facility. The team has expanded rapidly over the past five years, with Apple announcing in 2015 that it would add 1,000 to its Irish workforce.

Since 2012, Apple has invested almost €220 million in the Cork campus, most recently with an expansion that provides space for 1,400 employees. It was this expansion that Cook opened this week.

There have been hiccups along the way. In 2016, the EU found that Apple had benefited from illegal State aid in Ireland, and ordered it to pay €13 billion in taxes and penalties it said were owed over a 10-year period.

Then there was the data centre saga. A two-year delay in the planning process saw Apple shelve plans for the data centre in Athenry. It was a disappointment for both the company and those in the community who had backed the project.

“We loved the community there. Fortunately we had great support from the community who wanted us there. That’s probably the biggest disappointment from our point of view; we felt we could have been in the community and made a lot of friends like we had in Cork and grown the relationship over time,” Cook said. “But we understand and respect the process.”

There is no indication that Apple is planning more major expansions in Cork – it is already the largest private employer in the region – but that data centre issue may yet come around again.

“If the rules changed – we don’t plan on stopping growing – and things may come back around at some point in time,” said Cook.

Things are a bit more competitive now, particularly given the tax changes in the US that have made it more attractive to repatriate cash held overseas. Yet Cook’s comments may go some way to easing the minds of those concerned at Apple’s investment into Ireland.

Cook’s trip wasn’t all about Apple’s business. He took the opportunity to clearly lay out the company’s opposition to the Trump administration’s policy of separating immigrant children from their parents at the Mexico-US border, calling it inhumane and promising that the company would be working with the government to try to be a “constructive voice” on the issue.

“I’m personally a big believer in the way to be a good citizen is to participate, is to try to advocate your point of view, not to just sit on the sideline and yell or complain. That will be the approach we will take here. This one in particular is just heartbreaking and tragic.”

It isn’t the first time Apple has publicly pushed back against US authorities. It has resisted pressure to help make it easier for law enforcement to get into its devices. In 2016 it had a much publicised showdown with the FBI over unlocking the iPhone of a mass killer.

In that instance the FBI decided to go elsewhere for the skills it needed. However, Apple recently announced that it would be closing off the loophole that authorities had used to get into locked phones. The new update effectively disables the data port – which also functions as the phone’s charging port – an hour after it is locked. This doesn’t affect charging the phone, but if you want to transfer data to or from the phone you will need the password to nudge the port back into life.

That may cause the company to fall foul of the authorities in the US. But Apple doesn’t seem overly concerned by the possibility. It is currently facing the prospect of finding itself in the middle of trade wars thanks to the current administration’s policies.

“I’m hoping that in all the cases, whether it’s with the conversations that are going on in the EU, China or others, that calm heads can prevail,” said Cook.

“These arrangements between countries are very complex. All sides could probably conclude that they need to be updated over time, because things do change, but I’m a big believer that free trade is a key part in what has lifted the world.

“I’m also a believer that in some cases globalisation has hurt people in some countries. I think we all need to focus on how to help those people also benefit. But I don’t believe creating an issue on the other side helps these, I just think more people are being hurt, so to speak. So I’m hoping for a quick resolution.”