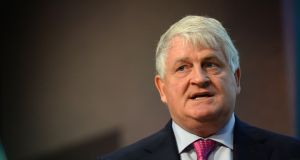 Digicel owner Denis O’Brien. The group is planning to cut its debt.

Businessman Denis O’Brien’s telecoms group Digicel is planning to raise as much as $500 million (€432 million) from asset sales in the next nine months in order to lower its debt burden, according to market sources.

The company told debt analysts and bond investors on a call this week that it plans to complete the sale and leaseback of 450 wireless communications towers across the Caribbean by the end of September, and there is also mounting speculation that the group could sell its business in Panama.

Digicel is understood to have received about $180,000 a tower for the sale of 215 mobile sites in the French West Indies earlier this year to Florida-based Phoenix Tower International. On that basis, it would make $81 million from the current portfolio sale, which has already been agreed but yet to be completed.

The group, founded in 2001 and which currently spans 32 markets across the Caribbean, Central America and Asia Pacific regions, reported to bondholders that its full-year earnings before interest, tax, depreciation and amortisation (ebitda) fell by 2 per cent to just over $1 billion. That left its net debt at 6.7 times ebitda at the end of its financial year on March 31st, up from six times a year earlier.

The group has told bond investors it plans to reduce its debt ratio to 5.7 times ebitda by March of next year, with the nature of its guidance pointing to as much as $500 million of asset sales and about 10 per cent earnings growth to about $1.1 billion.

A company spokesman declined to comment on the plan.

Last year, the group set about cutting more than 1,500 jobs, or 25 per cent of its staff, in an effort to reboot earnings and lower the burden of its debt pile.

While Digicel is said to be planning to refinance within the next 12-18 months some $2 billion of bonds that mature in September 2020. However, the value of the notes have fallen to 77.5 cents on the dollar from 100 cents earlier this year, amid a broad sell-off of debt across emerging markets this year and as investors monitor the telecoms group’s own performance.

The bonds move has sent the market interest rate, or yield, on the debt to 21 per cent from 8 per cent.

“A refinancing of the 2020 bonds is not feasible any time soon, given the current market conditions and trading yields on the company’s bonds,” said a US-based analyst who covers Digicel’s bonds. He declined to be named.

1 How to avoid a communication breakdown
2 How much state pension will I get next year?
3 Irish tech company Asavie acquired by Nasdaq-listed Akamai
4 118 Grafton Street offers prime pitch for the post-pandemic era
5 Am I crazy to consider switching to an Ulster Bank mortgage?
Real news has value SUBSCRIBE