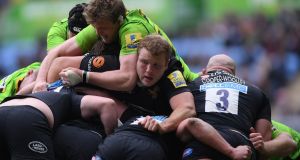 Wasps rugby club in action. The Premiership club, previously known as London Wasps but now based in Coventry, said on Friday night the “falsification” of material was a “an isolated incident”. Photograph: Laurence Griffiths/Getty Images

The auditors to top English rugby club Wasps, which is owned by Irish businessman Derek Richardson, were presented with “falsified evidence” during the course of their 2017 audit, according to a statement in the company’s accounts this week.

The auditors, PricewaterhouseCoopers (PwC), have chosen to resign and will be replaced by Mazars, according to a notice filed with the London Stock Exchange.

The Premiership club, previously known as London Wasps but now based in Coventry, said on Friday night the “falsification” of material was a “an isolated incident”and it had put in place measures to strengthen financial procedures.

“[The incident is] at odds with our policy of maintaining the highest standards of governance,” the club said.

The issue is understood to relate to the wrongful classification as income of a £1.1 million cash injection last year from Mr Richardson, which had the effect of overstating the club’s 2017 earnings by more than 50 per cent.

When the earnings were correctly re-stated following the auditors’ intervention, it was found that Wasps Finance, a related company, breached the loan covenants attached to £35 million worth of its bonds that had been issued in 2015.

The bondholders provided a waiver in relation to the breach in January, and amended the covenant to allow shareholder contributions to be included.

The issue was directly addressed this week in the accounts by Mr Richardson, the club’s chairman, who made his fortune in the Irish insurance industry when he sold 123.ie for €80 million to Royal & Sun Alliance.

“During the course of their audit enquiries, the auditors were presented with evidence which their testing revealed to have been falsified,” he wrote. “Following the presentation of PwC’s findings, the board conducted a broader review of the financial processes, systems and controls across the group.”

Mr Richardson revealed in his statement with the accounts that, following this review, the club’s chief executive, Nick Eastwood, “has final sign-off on the terms and accounting treatment of any revenue contract with a value in excess of £100,000”.

Wasps is based at the £60 million Ricoh arena in Coventry, having moved there in 2014, the year after Mr Richardson took control.

The Dublin businessman for many years ran a successful insurance brokerage, before launching 123.ie, where he was later joined by fellow entrepreneur Andrew Collins. The two men retained 123’s life business, which they still operate as Hello.ie.

For several years after the lucrative sale of 123.ie, 3.7, Mr Richardson operated from an address in Monaco. The most up-to-date company documents in Ireland, however, now list his address in Stratford-upon-Avon in England.