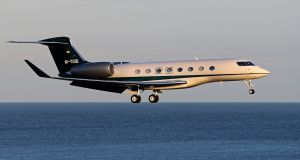 The M-YGIG Gulfstream G650 executive jet, sporting silver and black livery with an Irish tricolour on its tail, landed at Dublin Airport on Saturday

Businessman Denis O’Brien has taken delivery of a new $70 million corporate jet, just 2½ years after he last bought an identical one.

The new Gulfstream G650, which is among the world’s most sought-after executive jets, was dispatched from Savannah, Georgia, where Gulfstream’s corporate headquarters are located, on Friday.

It flew from there directly to the Isle of Man, the location for a wide network of companies linked to Mr O’Brien, where the plane was registered and allocated the unique call sign M-YGIG.

The plane’s ownership was registered at the weekend to a Manx company linked to Mr O’Brien, AC Executive Aircraft (2017), and documents show the purchase appears to have been funded by Bank of America.

AC’s shares are held in trust and the company’s directors include Dublin-based aviation leasing consultant Margaret Clandillon. Her other business links to Mr O’Brien include acting as a director of Actavo, his infrastructural services company once known as Siteserv.

On Saturday morning, the new plane, sporting silver and black livery and with an Irish tricolour on its tail, landed in Dublin, where it was photographed the next day by an Irish aviation enthusiast.

Aviation records show it remained in Dublin until Sunday evening, when it flew to Luton airport, where it remained at the time of publication. Mr O’Brien’s spokesman did not respond to a request for comment, and it is unclear if the billionaire was onboard the plane when it left Dublin.

Mr O’Brien last took delivery of a G650 in November 2015. That plane, which was owned by another Manx company using a similar structure, is now for sale through O’Gara Jets, a broker in Georgia where Gulfstream is located.

O’Gara has not released the price it is seeking for the old plane, but similar models on other broking sites are available for more than $60 million. It appears Mr O’Brien may have had a trade-in agreement with Gulfstream.

It has clocked up 698 landings and 2012 hours of flying time since its registration in 2015, which would be considered heavy use for an individual owner.

Mr O’Brien, who is tax resident outside of Ireland, is known to travel extensively, including to the Caribbean where his telco Digicel is located.

Digicel, which is about to embark on a investor roadshow, used to pay Mr O’Brien between $8 million and $9 million annually for the use of his plane, according to documents filed in 2015 for its abandoned flotation.

1 Oxford Covid vaccine trials offer hope for elderly
2 Ulster Bank to introduce new card payment controls on app
3 Hurrah for the companies giving staff more time off
4 Sustainable investment: How your pension can help tackle climate change
5 RTÉ to seek 70 voluntary redundancies as ‘large costs’ beckon in 2021
6 Apple planning updates to its AirPods earbuds next year
7 How much state pension will I get next year?
8 Some Irish money market funds came close to danger in March
9 Start-up Loanitt raises €570,000 as it looks to double headcount
10 How long can Government afford to keep State pension age at 66?
Real news has value SUBSCRIBE