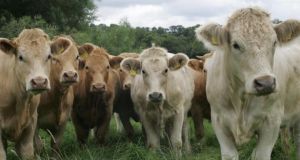 Mark Goodman, a son of beef baron Larry Goodman, has moved to shield the future finances of his lucrative consultancy business from public view, just a day after a media report said it made €2.2 million in profits last year.

MGI (Mark Goodman International) Marketing, applied on April 11th for unlimited status, which means it will no longer have to file publicly available accounts. Its financial statements, reported upon the previous day, show that accumulated profits rose from about €600,000 to €2.8 million over the course of 2017.

The company, which has no employees and is wholly owned by Mark Goodman, had a cash balance of €2.1 million at the end of last year and was owed a further €1.8 million by debtors.

MGI describes itself as a “specialist advisory, global sourcing and investment firm”. It says its primary focus is working with meat companies operating in China and southeast Asia.

The business was founded 14 years ago while Mark Goodman was still at college studying marketing. He is, separately, also the managing director of the international division of Anglo-Beef Processors, the meat empire founded by his father.

A spokesman for MGI declined to comment last night. It is understood, however, that the company has no commercial relationship with ABP.

In addition to its meat marketing activities, MGI has also dabbled in the property industry. Financial statements show that in recent years, it agreed to lend up to €500,000 to a family-linked company to fund a property deal.

Mark Goodman’s co-director at MGI is Peter Brennan, a Louth-based associate of the family, with whom he is also involved in another property company, Saphire Village Holdings.

Mr Brennan is also in business with his brother, Laurence Goodman Junior, through a property development company, Urban Life. It started out in the last recession buying so-called ghost estates and half-finished developments, and is now looking to expand in the Dublin commuter area.