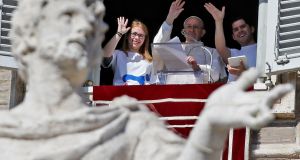 The Catholic Church in Ireland has put the collection box out for Irish business, seeking millions to help fund this year’s visit by Pope Francis, according to the ‘Sunday Business Post’. Photograph: Max Rossi/Reuters

The sale of Goodbody Stockbrokers to Chinese investors will value the business at €150 million, reports the Sunday Business Post. The figure includes its €45 million stake in the Irish Stock Exchange.

Fexco, which acquired 75 per cent of Goodbody in 2011 in a deal worth €24 million, could clear €90 million from the sale. It has already been repaid about €24 million in dividends. Goodbody management, meanwhile, could make about €60 million in cash and earnouts from the deal.

Lidl is to invest €200 million in its Irish operations in 2018, which would market its biggest one-year investment since it entered the market in 2000, according to the Sunday Independent.

The retailer, which has 154 stores in the Republic, is putting money into both its store network and in the building of a new distribution centre in Newbridge, Co Kildare. The latter will cost about €80 million, the newspaper said.

The Irish arm of travel publisher Lonely Planet booked pre-tax profits of €7.8 million after the company moved much of its international operations to Dublin, reports the Sunday Times.

Accounts recently filed to the Companies Office for Lonely Planet Global, which is based in Dublin’s Digital Hub, state that the Irish subsidiary assumed the role of “master publisher” for the “rest of the world market” in 2016.

The Catholic Church in Ireland has put the collection box out for Irish business, seeking millions to help fund the Papal visit later this year by Pope Francis, according to the Sunday Business Post.

Wealthy and individual corporate donors are being asked for hundreds of thousands of euro each to help pay for the visit, in return for tickets to the event.

The Central Bank has ordered Dublin-based CBL Insurance Europe to boost its capital and reserves, reports the Sunday Times. The directive comes after regulators in New Zealand intervened at the company’s Auckland-based company, CBL Corporation, triggering the suspension of trading its shares last week.

CBL sells into several EU markets from its base in Dublin and also operates within Ireland, providing home insurance and professional indemnity cover for solicitors.