‘If there are a couple of days of good weather, it’ll be even worse for us over Easter’ 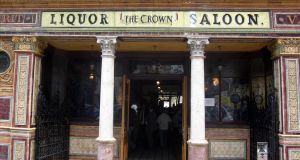 The Crown Bar in Belfast. Publicans and restaurateurs in the North are not happy with rules restricting alcohol sales over the Easter weekend. Photograph: iStock

Pubs and restaurants in the North fear restrictions on selling alcohol over the Easter weekend will encourage customers to head south to enjoy new, relaxed licensing laws, potentially costing the North’s hospitality industry up to £20 million (€22.8 million) in lost revenue.

Colin Neill, chief executive of Hospitality Ulster, the industry group which represents licensed premises across the North including pubs, restaurants and hotels, says there is no doubt that businesses in Northern Ireland will lose out to their competitors in the Republic this Easter. Mr Neill said the rule change would see more customers from the State staying at home to socialise instead of going North, while pubs in the Republic will attractnew Northern customers.

One of the North’s most prominent chefs, Michael Deane, who operates six of Belfast’s top restaurants, has warned he will close early on Good Friday because of the North’s licensing laws which allow alcohol to be sold after 5pm only.

Mr Neill estimated that the restrictions have previously cost the North £16 million in lost trade, but predicted this would rise to £20 million this year because of the new regime in the Republic.

Joe McDermott from the Phoenix Bar in Park Avenue in Derry said pubs in the city are expecting to see a definite “drift” in customers this Easter from the North to the south.

“We’re only five miles from Muff and 15 miles from Buncrana and it is bound to happen that there will be people who will travel over for a drink in the south.

“The licensing laws at Easter here make no sense whatsoever, every year they cost us business, this year we’ll have to wait and see but it could be worse because there’ll be a novelty factor where people will leave pubs in Derry and go over because Donegal has opened up. If there are a couple of days of good weather, it’ll be even worse for us over Easter,” Mr McDermott said.

According to David Downey, whose family owns two pubs including the Bank Bar & Bistro in the heart of Newry, it is not just the loss of local customers that will hit the hospitality industry in the North this year.

“We would traditionally have attracted customers from the south over Easter because for example even though our hours are restricted on Good Friday they were still better than compared to theirs.

“Now of course that’s all changed and not only do we expect to lose a lot of our customers to Carlingford on Easter Sunday because of the change in licensing laws in the south - we won’t get any in return. Border towns in the North are the ones that are really going to lose out because of Northern Ireland’s Easter licensing laws,”Mr Downey said.

But Henry McGlone, owner of several pubs in County Derry including Dormans in Magherafelt, one of the Northern Ireland winners in the UK’s National Pub and Bar Awards last year, said it is an issue for the industry across the North regardless of location.

“I know of some of my customers are heading south for Easter this weekend because of the novelty of the new licensing laws. Maybe it will just be a one off this year but we’re still going to lose trade and that is very, very frustrating,” he said.