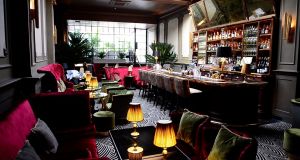 Stella theatre in Rathmines, Dublin. Press Up Entertainment operates about 30 businesses including the Dean Hotel in Dublin, the Wowburger franchise and the Stella. Photograph: Bryan O’Brien

The company, which operates about 30 businesses including the Dean Hotel in Dublin, the Wowburger franchise and the Stella theatre in Rathmines, has brought Goodbody Stockbrokers on board to assess funding options, including investor appetite for an initial public offering of shares, the sources said.

“Press Up Entertainment Group is in talks with Goodbody Stockbrokers to explore growth options for the business,” a spokeswoman for the company said in response to questions from The Irish Times. She declined to comment further.

The Press Up group has in recent years overtaken its rivals to become the largest and fastest-growing pub and restaurant group in Dublin city. It is also set to open its third hotel this year and has hospitality outlets in Cork.

The group, which last year had a turnover of about €52 million, has said it hopes to open at least nine new hospitality venues over the coming year, including the Devlin hotel in Ranelagh, which will open in the summer.

It is also planning a revamp of former private members club Residence on St Stephen’s Green, which it purchased recently. In addition, Press Up will soon open a cocktail bar in a three-storey building on Dublin’s Aungier Street, which company documents suggest will be called The Dutch Billy.

The group’s other recent purchases include the well-known Elephant & Castle restaurant business in Temple Bar.

Company documents suggest Press Up concluded a refinancing deal with AIB just before Christmas, which is secured on several of its pubs and restaurants.

The group is ultimately controlled by Keillan, a company registered in the Isle of Man. Its directors include Mr McKillen jnr, Matt Ryan and Liam Cunningham, who works for Mr McKillen jnr’s developer father, Paddy McKillen snr.

In addition to its reported purchases, industry sources say Press Up has also been extremely active behind-the-scenes in recent months, making a series of “unsolicited offers” to buy several well-known pub and restaurant venues.

While Press Up is primarily a hospitality operating business, Mr McKillen jnr and Mr Ryan also have significant property assets. Keillan appears to be the ultimate shareholder for their property development venture, Oakmount, which is managed separately to Press Up.

Documents filed in the Isle of Man and Dublin suggest that Oakmount recently concluded a major funding deal with US property hedge fund Greenoak Real Estate. It has provided finance to one of Oakmount’s companies, Zipony, for a mixed-use development in the Liberties district.

Oval Target, another Oakmount entity, appears to have received funding from Greenoak for the recent purchase of a major redevelopment site in Blackrock, opposite Frank Keane’s BMW dealership.

In addition, documents filed in Dublin suggest that Greenoak is backing another Oakmount company, Chirita, in the development of a new hotel on a docklands site on North Wall Quay, near the 3 Arena.

Oakmount is the landlord for several buildings where Press Up operates hospitality outlets, such as the planned Dutch Billy bar, the Stella and a planned hotel on the site of the old Howl at the Moon pub on Mount Street.

Mr McKillen jnr and Mr Ryan, whose first venture together was the Captain America’s restaurant chain, began assembling the businesses that comprise Press Up at the height of the recession, when the market was in retrenchment.

Many of their early bars and nightclubs, such as the trendy Workman’s Club beside the Clarence Hotel, were opened in buildings that are separately owned by Mr McKillen snr.

This, together with the fact that Oakmount operates as a landlord on many of its most recent ventures, suggests that Press Up could easily be carved out into a pure operating business for a flotation, or another capital raising exercise.

Industry sources said Mr McKillen jnr and Mr Ryan previously sought expressions of interest in Press Up about two years ago, for a then-valuation in excess of €30 million.

If Press Up does proceed with a flotation, it would be the first pub/restaurant operating business to float in Dublin since the O’Dwyer brothers Capital Bars businesses listed in Dublin in the late 1990s.

They later took the business private again, before it was broken up when the market turned.