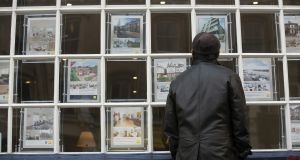 There’s a new lender on the pitch for property developers. A new fund that plans to lend to Irish developers for the construction of new houses went live yesterday, and has set a target of financing the building of thousands of homes here within the next three years.

Housing is also the focus or a report from the Central Bank which warns that nearly 4 per cent ofIrish mortgages taken out before the crash could default in the event of a financial shock. And the adverse scenario to create such an outcome is not implausible: it is based on a 2016 stress test used by the European Banking Authority.

And future economic threats aren’t too fanciful, at least according to billionaire investor George Soros. He has warned that a surging dollar and a capital flight from emerging markets may lead to another “major” financial crisis and that the EU is facing an imminent existential threat.

As a backdrop to such warnings, the ongoing political turmoil in Italy continues to take its toll on the markets, with yields on the riskiest Irish bonds rising to their highest level since at least last summer as markets become increasingly rattled. Joe Brennan reports on the market uncertainty while Eoin Burke-Kennedy offers a quick explainer on why it erupted and what’s likely to happen next.

Liam McCaffrey, chief executive of Quinn Industrial Holdings (QIH), is suing Facebook over comments on a page purportedly run by supporters of his former mentor Sean Quinn, who founded the Quinn Group but later lost control.

Ciarán Hancock writes that for all the annoying GDPR emails last week, there was some interesting details to be got from the dull policy statements provided by firms. He outlines several local examples, from restaurants revealing their real voucher policies to how big stores like Dunnes monitor your shopping patterns.

Back to the property market and Jack Fagan reports on a waterfront site at Howth Harbour in Dublin with potential for 340 apartments that going on the market for €25 million, while 30 period houses mainly located in Dublin 6 and divided into 265 apartments are to be offered for sale in a single lot at €60 million.