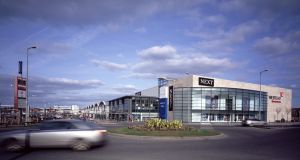 The Westend Retail Park in Blanchardstown, orginally developed by the Cosgrave Property Group, was one of the first open-use retail parks in the Republic .

The deal comes less than two years after the sale of the adjoining Blanchardstown Shopping Centre to US investment group Blackstone for €950 million.

The park, one of the first open-use retail parks in the Republic, was originally developed by the Cosgrave Property Group.

Green Reit acquired it as part of its purchase of the so-called Sapphire Portfolio in 2014.*

The park, which comprises 27,900sq m (300,000sq ft) of retail and other commercial space, was recently valued at €147.1 million. Existing tenants include Next, Heatons, New Look, Lidl, Nike, Gap and Argos.

It generates an annual rent of €8.5 million, which represents about 11 per cent of Green Reit’s total annual rent roll.

Green Reit said it had exchanged papers for the sale of the park with DSW, Deutsche Bank’s investment arm, and the deal was expected to be completed by the end of next month.

It said proceeds from the sale will go towards reducing the company’s revolving credit facility, which will give it access to debt capital for investment in other projects, namely its Central Park office park in South Dublin and at Horizon Logistics Park, adjacent to Dublin Airport, Green Reit said.

Chief executive Pat Gunne said: “The disposal of Westend Retail Park, representing a 55 per cent profit on cost, is in line with our stated strategy of recycling a portion of our capital to invest in higher return development projects in Horizon Logistics Park and Central Park, while maintaining balance sheet discipline below our self-imposed 25 per cent gearing level.”

1 In this strangest of recessions, what happens next for Ireland?
2 Bank of Ireland sees about 2,000 staff apply for voluntary redundancy
3 Estée Lauder staff at Dublin airport plan further strike action
4 Fortnite owner signs multimillion deal to buy Irish ‘kidtech’ firm
5 Should I switch bank now with Ulster Bank at risk of closing?
6 Michael O’Leary is the boss you want to lead an airline out of crisis
7 Overhaul of lease arbitration regime would be a game changer for retailers
8 Best Covid-19 ‘influencers’ will avoid hectoring
9 Ireland’s Covid-19 economy in five graphs
10 Dunnes Stores set to enter grocery delivery market
Real news has value SUBSCRIBE