The Italian crisis: what you need to know 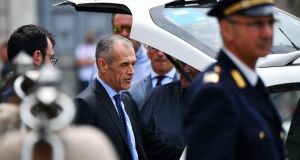 Carlo Cottarelli after a meeting with Italian president Sergio Mattarella that gave him a mandate to form a government. Photograph: Alberto Pizzoli/AFP/Getty

What is causing the current bout of market turbulence?

It was triggered by political instability in Italy, but also reflects a deeper concern about the country’s €2.3 trillion debt pile, the biggest in the euro zone, and the possibility that it might ultimately vote to leave the euro.

The EU’s third largest economy was thrown into crisis this week when Italy’s president Sergio Mattarella effectively blocked a populist alliance from taking power by vetoing the nomination of its eurosceptic economy minister.

Mattarella has now asked the former International Monetary Fund economist, Carlo Cottarelli, to form a technocratic administration to hold things together until fresh elections can be held early next year. However, the poll may result in an even bigger mandate for Italy’s eurosceptics, sparking an even bigger confrontation with the establishment and the EU.

How have markets reacted?

In a word, badly. The brunt of the pain has been felt on bond markets with yields on Italian notes skyrocketing. Italy’s 10-year bond yields, a measure of the country’s sovereign borrowing costs, breached 3 per cent on Tuesday, the highest in four years. At the start of the month they were just 1.8 per cent.

The government sold €5.5 billion worth of six-month bonds on Tuesday, but at the highest yield for more than five years.

The weakness spread to other peripheral euro zone bonds and currency markets, with the euro falling to a new six-month low against the dollar of $1.15. Stockmarkets were also down on Tuesday with bank shares, bruised by the sell-off in government bonds, the worst hit. Adding to the uncertainty, Spanish prime minister Mariano Rajoy will face a vote of confidence in his leadership on Friday.

Have Irish bond yields been affected?

Yes, but, in contrast to other euro zone peripheral nations, the yield on 10-year notes, effectively the cost of Government borrowing, fell 8 percentage points to 0.95 per cent on Tuesday, reflecting what market commentators say is the Republic’s new “semi-core”, rather than peripheral, status. That said, the yields on bonds issued by Irish banks have been affected negatively. The yield on Bank of Ireland’s so-called additional Tier 1 capital, a form of subordinated debt, reached 6.66 per cent on Tuesday, its highest level since last June. The rate on similar bonds at AIB and Permanent TSB have also spiked.

How serious is this likely to get?

It’s a far cry from the 2012 euro debt crisis when several peripheral states looked in danger of default and many were predicting the demise of the single currency. Back then the crisis was defused by European Central Bank’s Mario Draghi’s pledge to do “whatever it takes” to underpin the currency.

Nonetheless the current turmoil is probably the biggest to hit the euro zone since Greece threatened to exit in 2015. Also Italy’s economy is much bigger than Greece’s and its €2.3 trillion debt is the largest in the EU so if it crashed, the fallout and subsequent contagion could be massive.

What is likely to happen next?

The concern is that fresh elections could cement the position of eurosceptics in Italy, sparking an even bigger crisis. Then again, the populist parties have refrained from calling a referendum on EU membership, perhaps sensing it wouldn’t be passed and maybe they won’t get as strong a mandate next time around, but no-one really knows where this one is going. And just to add to the sense of forboding, US financier George Soros rowed in with a suggestion that the EU was facing a renewed existential threat from populists in power because of austerity and Brexit threatening “territorial disintegration”.