Just half of office construction due by end of 2021 likely to be delivered, says Savills report 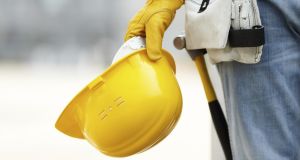 Savills’ Skyline Survey estimates developers want to add 12 million square feet of office space in the capital by the end of 2021, enough space for 120,000 workers.

Only half of the 202 new office buildings planned for Dublin over the next three years are likely to be delivered, according a report from property advisers Savills Ireland.

Savills’ Skyline Survey estimates that developers are seeking to add some 12 million square feet of new office space in the capital by the end of 2021, with more than 232,000sq m (2.5 million sq ft) of existing buildings being refurbished or redeveloped as part of the process. That is enough space for 120,000 workers.

However, the report by Andrew Cunningham and Christopher Boyce points to a historically “stark rate of slippage”, with developers tending to overestimate how much space they will deliver in future.

This deferral rate comes despite record recent take-up levels and demand for offices in key locations in the city.

“Our analysis over time shows that significant slippage in delivery of the pipeline is very common,” Mr Boyce said. “The estimated new stock for delivery in 2019 has already fallen by 17 per cent compared to the May 2017 figures.”

“Tighter purse strings and greater regulations in the banks and finance houses mean conventional senior debt from domestic banks for speculative development remains scarce, an undoubted cause of the slippage in delivery of new stock,” said Mr Cunningham, head of offices at Savills Ireland.

Some 46 Dublin office schemes are currently under construction, with more than half of this space already allocated to tenants ahead of completion.

The analysis by Savills shows a clear focus on prime locations, with demand driven by tech companies, serviced-office operators and financial services firms, all of which are vying for office space in Dublin 2.