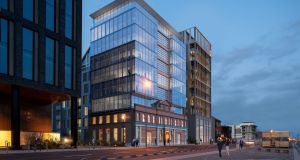 Developer Paddy McKillen jnr’s Oakmount and partners Core Capital have paid around €10 million to acquire a key waterfront site in the Dublin docklands from Arthur Molloy and Michael Sherry, of Molloy & Sherry Logistics.

The sale of the site known as No 73 North Wall Quay comes just three months on from Dublin City Council’s decision to grant planning permission to the property’s previous owners for a 3,700sq m (39,825sq ft) development on the site.

While the permitted scheme will be office-led with 2,154sq m (23,185sq ft) of lettable space distributed over eight floors, it also includes two units at ground floor level suitable for retail or cafe use.

Oakmount’s efforts to secure a tenant for the new block should be enhanced by the strength of its location.

The property occupies a pivotal position immediately beside the headquarters of the Central Bank, and Dublin Landings, the one million square foot mixed-use scheme currently being built by Sean Mulryan’s Ballymore and its Singaporean-headquartered partners, Oxley.

No 73 is also within a short walk of Salesforce’s new European headquarters at Spencer Place, the 66,599 m (717,000sq ft) mixed-use scheme now under construction.

Oakmount itself is already active within No 73’s immediate environs, and is progressing with the delivery of a new 98-bedroom hotel which will be named The Mayson.

The hotel is set to incorporate a rooftop restaurant and bar, and will operate under the umbrella of McKillen jnr and Matt Ryan’s Press Up Entertainment group.

In terms of its design, No 73’s planning permission requires the retention of its existing two-storey redbrick facade, which is a protected structure.

This should not present too much difficulty for Oakmount given its record to date on the preservation and restoration of other properties with protected-structure status within its portfolio.