Deal would create European giant with €1.4 trillion of assets under management 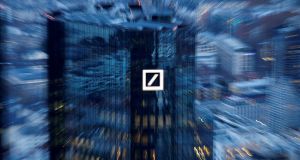 One structure being considered would see UBS hive off its asset-management unit and fold it into Deutsche’s DWS in exchange for shares in the larger group. Photograph: Kai Pfaffenbach/Reuters

The asset-management arms of Deutsche Bank and UBS are in serious talks to merge, according to people close to the discussions, in a deal that would create a new European champion in the investment industry.

The discussions about a deal have been taking place “for a couple of months”, one of the people said. If completed, the merged asset manager would leapfrog France’s Axa and the UK’s Legal & General and create a rival to France’s Amundi, Europe’s largest money manager with just over €1.4 trillion under management.

One structure being considered would see UBS hive off its asset-management unit, which oversees €700 billion, and fold it into Deutsche’s DWS in exchange for shares in the larger group. DWS, which is 79 per cent-owned by Deutsche, has €662 billion of assets under management. The German bank would remain the company’s top shareholder but its interest would be diluted.

A DWS and UBS asset-management combination would be better able to compete with BlackRock and Vanguard, the US giants of the investment world that have combined assets of $11.7 trillion (€10.4 trillion).

Deal activity in the fund sector is expected to be strong in 2019 as the biggest groups – those with at least $1 trillion in assets – win the bulk of new business inflows and leave smaller rivals struggling.

All of the people close to the talks cautioned that a deal was not guaranteed and a deal announcement was not imminent. Earlier this month, Bloomberg reported that UBS has considered a number of scenarios for combining its asset management arm with DWS.

Shares in DWS have climbed about 35 per cent to €31.78 since the start of the year, giving it a market value of €6.42 billion. Despite the rally, the shares still trade slightly below their book value on Deutsche Bank’s balance sheet, of about €32.50 a share.

The talks come as DWS has emerged as one of the crown jewels in Deutsche Bank’s portfolio at a time it is holding its own merger discussions with the country’s number two lender, Commerzbank. – Copyright The Financial Times Limited 2019