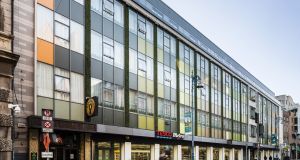 Temple Bar Inn: the 101-room hotel will be sold with vacant possession, along with a ground-floor retail unit.

The Temple Bar Inn hotel, located at the heart of Dublin’s Temple Bar, is expected to attract both domestic and international interest when it is offered for sale this week.

JLL is guiding in excess of €45 million for the 101-room hotel, which will be sold with vacant possession, along with a ground-floor retail unit, occupied by Tesco, which will remain in occupation. The retailer has seven years’ term certain remaining on its lease, having first opened its doors in 2011.

The hotel’s site at 40-47 Fleet Street, the busy thoroughfare adjacent to Westmoreland Street, is described by the agents as “one of Dublin’s best hotel trading locations”, and it is understood that the hotel has performed strongly since opening in 2014, achieving occupancy rates in excess of 85 per cent.

The ESB owned the building, which was formerly laid out as offices, but sold it for a reported €33 million in 2006 to a company controlled by Wexford-based Stafford Holdings. The family company, which is primarily involved in the shipping, energy and retail sectors, had plans to demolish the existing structures in order to build a 10,800sq m (116,250sq ft) office and retail scheme on the 0.175 hectare (0.43 acre) Temple Bar site.

The onset of the recession appears to have put paid to those plans, and in 2013 Heights Hospitality Holdings agreed to lease the property, expending a significant sum to convert the office block into its current hospitality use and to construct an additional floor on top of the existing structure.

Heights Hospitality subsequently purchased the building from Stafford Holdings and secured a number of planning permissions to extend the hotel. This “expansionary potential” will be of significant interest to potential purchasers, according to JLL, as it will facilitate two extensions.

A 56-room extension can be added, while a second extension to add a further 29 rooms can be implemented in the medium term. When completed, the two additions will see the hotel’s overall room count rise to 186.

Aside from extending, there is also scope to expand the existing food and beverage offering , as the property now has a publican’s licence in place.

There was significant activity in the Irish hotel market in the first three months of this year. According to CBRE, four hotel sales closed during the period for a total of more than €36 million. One such hotel was also in Temple Bar, namely the 27-room Dublin Citi Hotel and Trinity Bar on Dame Street, which sold to Singaporean investors for about €12 million.

Outside of Dublin, the Heritage Hotel in Killenard, the Tullamore Court in Co Offaly and Castle Oaks House Hotel in Co Limerick all changed hands. In addition to deals that closed, other sales were announced, including the €50 million sale of the Powerscourt Hotel in Co Wicklow to the MHL Hotel Collection, a consortium led by US billionaire John Malone, bringing the total spend to more than €86 million.

That figure is set to be significantly boosted by other upcoming sales, including that of the Conrad Hotel on Earlsfort Terrace in Dublin 2, which was reportedly quietly brought to the market in January seeking in excess of €115 million.