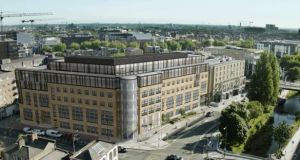 The largest transaction recorded was the off-market sale of Charlemont Exchange.

Some €2.5 billion will likely be invested in the commercial property sector this year. That is down from €3.2 billion in 2018, according to Cushman & Wakefield.

However, its forecast figure could rise to more than €4 billion if the sale of Green REIT completes as an investment transaction.

Cushman & Wakefield said it expected about 250,000sq m of space to be occupied in the capital over the course of 2019.

The high demand for commercial will see prime rents rising to €676 per sq m by year-end, according to Cushman & Wakefield managing director Aidan Gavin.

The Irish investment market experienced a solid opening to 2019 with turnover of €507.8 million reported across 29 deals in the first quarter.

The largest transaction recorded was the off-market sale of Charlemont Exchange, which was acquired from Pat Crean’s Marlet Property Group by the South Korean investment fund Vesta management in a deal valued at €145 million.

Other noteworthy transactions to date include the sale of 7-9 Henry Street for €44.2 million to DWS, and the €44 million purchase of the One Building to BNP Paribas.

According to Cushman Wakefield’s data, the office market dominated transaction activity, accounting for 54 per cent or €275.5 million of total spend in the first three months of the year.

The real estate services company said that contrary to what headline figures suggested, demand for residential assets was strong. Capital targeting residential assets totalled €29.1 million in the first quarter, with an average lot size of €9.7 million.