Take-up rose 66% in the quarter compared to previous year 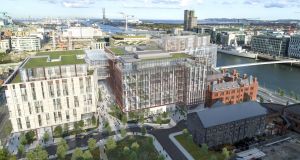 An artist’s impression of the new Salesforce Tower in Dublin’s Spencer Dock.

The volume of new office deals signed in Dublin in the first quarter of this year grew by 66 per cent when compared with the same period in 2018 as a result of rapid expansion in the technology sector, according to a report by BNP Paribas real estate.

Take-up, a metric that encompasses all deals signed including pre-lets, reached 133,306sq m across 57 deals, with the technology sector accounting for more than half of that in a quarter that was the third strongest on record.

The largest letting of the period involved Salesforce agreeing to pre-let more than 43,000sq m at Spencer Place in Dublin.

Brexit was one catalyst for the strong figures vote, the real estate agency noted. More than 28,500sq m leased since 2016 to companies including JP Morgan, Aptiv, Coinbase and Bank of America.

Looking ahead, Kate Ryan, an associate director and head of research at BNP Paribas real estate, said that strong levels of take up are expected to continue with about 250,000sq m due for delivery in 2019.

“Large multinational tech companies are expanding at a rapid pace and accounting for the lion’s share of overall office take-up each quarter. While these large deals are prevalent in the market at present, more than 60 per cent of all lettings in the first quarter fell within the sub-500sq m size band which somewhat dispels concerns that the serviced office market has hampered the market for lettings at this end of the scale.”

Meanwhile, commercial property investment reached €609 million in the period with retail emerging as a strong performer, accounting for €186 million of investment.

The largest sale in the period was of a 25 per cent stake in the Pavilions Shopping Centre in Swords, acquired by Irish Life for €71 million from Irish property investment group Iput . It now co-owns the centre with UK real estate investor Hammerson.

While the investment sector posted a strong quarter, it was down 35 per cent relative to the first quarter of 2018 which was boosted by three “mega-deals” including the €175 million sale of Eir’s headquarters at Heuston South Quarter.

Overseas investment totalled €365 million with Asian investors representing 43 per cent of the total. One such investment was the sale of Charlemont Exchange for €145 million to South Korean buyers.

With more than €1.8 billion worth of property on the market, BNP Paribas expects turnover to exceed €2 billion this year.