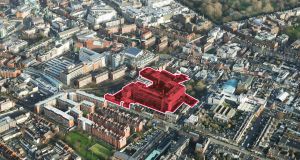 While the figure represents a premium of 75 per cent on the €80 million price guided by Knight Frank when they brought the property to the market last February on behalf of DIT’s successor, Technological University Dublin, the 3.57-acre site is widely acknowledged as being one of the best redevelopment opportunities to have been offered for sale in the capital in recent years.

The deal will be seen within the property industry as a particular coup for Westridge Real Estate chief Shane Whelan, representing as it does the first “mega deal” he has secured since departing from his role as development director with RGRE.

Before that, Mr Whelan worked for a number of years as a senior asset manager with Treasury Holdings, the property group Johnny Ronan and Richard Barrett headed up prior to the global financial crisis.

While Mr Whelan declined to comment on the Kevin Street deal when contacted by The Irish Times, sources said the winning consortium is considering a plan to deliver a wide-ranging scheme comprising a combination of Grade A offices and multi-family PRS (private rented sector) residential units on the site.

The development is also expected to include retail, food and beverage offerings.

A feasibility study prepared by architects O’Mahony Pike in advance of the sale of the Kevin Street campus suggests it is capable of accommodating one or other of two mixed-use schemes that would extend to 51,000sq m (548,959sq ft) and 53,000sq m (570,487sq ft) respectively.

The recent introduction of new urban development and building heights guidelines may allow for a larger and higher scheme than the unlisted six-storey 22,000sq m (236,806sq ft) collection of buildings on site.

Commenting on the site’s potential at the outset of the property’s marketing campaign last February, Evan Lonergan of Knight Frank noted the “significant dearth [of] and unprecedented demand” for city centre sites of an equivalent scale.

Mr Lonergan declined to comment on the sale of the Kevin Street portfolio when contacted by The Irish Times yesterday.

The former DIT campus is located just 300m from the Luas Green Line stop at St Stephen’s Green, and sits within walking distance of the city centre. Occupiers in the area include KPMG, the OPW and the Royal College of Surgeons.

The site has more than 110m of frontage to Kevin Street Lower and is also bounded by Camden Row, St Kevin’s Park, Liberty Lane and New Bride Street.

1 Explainer: what is the row about SF’s multinational tax plan?
2 Personal insolvency practitioner to pay €6,000 after providing misleading details
3 Britain after Brexit will not be alone, but it will be lonelier
4 Getting out from under ‘never-ending’ Celtic Tiger debt burden
5 Banks withdrawing from ATMs – another failure of regulation
6 Election 2020: Parties' pledges on housing simply don’t add up
7 Pensions: Estonia plans to unleash a potential €4.85bn on economy
8 EU eyes phasing out smallest euro cent coins
9 It’s getting easier and more profitable to be green
10 BBC announces 450 jobs will go in newsroom shake-up
Real news has value SUBSCRIBE