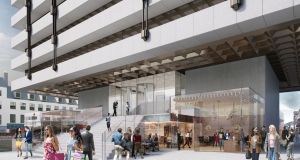 WeWork, the US shared office group popular with millennials and tech start-ups, has signed on to become the anchor tenant at One Central Plaza, the old Central Bank tower on Dublin’s Dame Street.

Mixed martial arts fighter Conor McGregor is continuing his battle for a broad range of intellectual property rights related to his personal brand. McGregor has applied to register the trademark for the term “The Green Back” across Europe.

Efforts to remove the complexity of current pension rules are underway, but the Association of Pension Trustees, whose members administer self-administered pensions in Ireland, have complained that the reforms process is going on behind closed doors.

New research from PriceWaterhouse Coopers (PWC) suggests crime against business is on the rise. It also suggests cybercrime is the top form of crime against Irish businesses, and is twice as prevalent here as the average abroad. In its Irish Economic Crime and Fraud report, PWC finds that almost half of the 77 companies surveyed have experienced some form of crime over the last two years since it last conducted the survey, up from 34 per cent in 2016.

As the game of Brexit continues to be tied in knots by semantics, the latest focus is on the meaning of the word ‘meaningful’. In his column this week, Chris Johnsargues that something is going to happen either to move the Brexit deadline or to introduce yet another fudge.

Meanwhile, Pilita Clark argues that the rise of female bots - digital virtual assistants - shows the digital future is female - but not in a good way. “All are polite, helpful and in Ava’s case, strikingly gorgeous. In other words, they are precisely the sort of bots one might expect from a tech industry dominated by men.”

Brazil’s Rubens Menin, the largest residential real estate developer in Latin America, has been named EY World Entrepreneur of the Year for 2018. The Brazilian was selected from 56 finalists from 46 countries.

Harry Hughes, chief executive of Co Mayo-based speciality clothing company Portwest, represented Ireland at the awards as holder of the the Irish entrepreneur of the year title. Profiling the next tranche of finalists in the awards, we look at the four nominees shortlisted this year in the international category.

1 Staff at Dublin and Cork airports to vote on work practice changes
2 Ufurnish: ‘It’s like Skyscanner, but for furniture’
3 Avoca warns of redundancies due to coronavirus
4 Errant texts highlight weaknesses in banks’ digital shift
5 Over 400 complaints from migrant workers at meat plants lodged with WRC
6 Coronavirus: We must save lives but we also need to live
7 Companies without tax clearance shut out of Covid wage subsidy
8 McGann stepping down at troubled Aryzta
9 The Irish Times Company of the Year: the three finalists
10 Transferring the family farm without a tax headache
Real news has value SUBSCRIBE