Conor McGregor wants to be ‘The Green Back’ for Europe 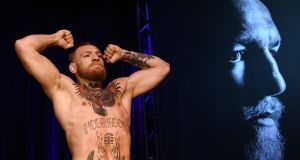 Conor McGregor’s company, McGregor Sports and Entertainment, has filed for a raft of intellectual property marks with EUIPO over the last year. Photograph: Ethan Miller/Getty Images

Mixed martial arts fighter Conor McGregor is continuing his battle for a broad range of intellectual property rights related to his personal brand.

The Crumlin fighter has applied to register the trademark for the term “The Green Back” across Europe. He is also seeking protection for “McGregor F.A.S.T.”, a sports conditioning and training programme associated with the athlete.

The applications were made in recent weeks at the European Intellectual Property Office in Spain. His company, McGregor Sports and Entertainment, has filed for a raft of intellectual property marks with EUIPO over the last year, some of which are mired in opposition from commercial rivals.

Greenback is a common slang term for US dollars. McGregor posted a picture of himself online earlier this year in which he refers to himself as a Green Back, although it has since been deleted.

The Estée Lauder-owned MAC cosmetics group has previously objected to Mr McGregor’s application to register another of his monikers, Mystic Mac, across Europe.

A Dutch fashion company also raised concerns over his use of McGregor for clothing, while Carlow brewer Séamus O’Hara has objected to Mr McGregor’s attempt to register Notorious for whiskey.