WeWork to be anchor tenant at old Central Bank building

Workspaces will be let to freelancers in creative and tech 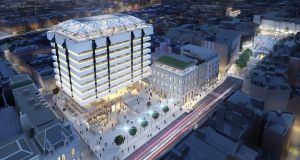 One Central Plaza, which was previously the headquarters for the State’s financial regulators, will be WeWork’s third shared office space in Dublin

WeWork, a US shared-office group popular with millennials and tech start-ups, has signed on to become the anchor tenant at One Central Plaza, the old Central Bank tower on Dublin’s Dame Street.

WeWork will take space across eight floors of the building, which is being redeveloped by US real estate group Hines and Hong Kong-based Peterson Group.

Individual workspaces will be let by WeWork to hundreds of self-employed and freelancers workers in the creative and tech sectors, small businesses and others seeking shared office space from late 2019, say the site’s developers.

The landmark building, which was previously the headquarters for the State’s financial regulators before they relocated to a new premises on the Docklands, will be WeWork’s third shared office space in Dublin.

At its Ballymore-developed Dublin Landings scheme on the city’s North Wall Quay, WeWork has similarly priced offerings, although dedicated offices are slightly cheaper. It also targets start-ups as they grow: We Work charges from about €6,000 per month for a dedicated office for 10 staff.

WeWork’s workspaces are openly pitched at millennials, with a focus on micro-roasted free coffee and bike spaces at the offices. Its “dog-friendly” Iveagh Court complex, for example, is advertised partly on the basis of its proximity to the Bernard Shaw, a local pub popular with hipsters.

The group has expanded rapidly since it was founded in New York eight years ago, and now rents space to 250,000 “members” in 74 cities worldwide. WeWork recently raised $400 million, in conjunction with the Rhone private equity group, to expand its footprint.

Brian Moran, the senior managing director of Hines Ireland, welcomed the deal with WeWork as a “positive step” for Central Plaza, which in addition to the landmark tower also includes a number of nearby buildings with 135,000sq ft of commercial space overall.

The wider development, which includes retail space and a restaurant on the roof of the main tower, received final planning permission from An Bord Pleanála in recent weeks.

“Central Plaza will accommodate over 1,300 professional workers and create over 300 new full and part-time retail and hospitality jobs across the five existing buildings that make up the Central Plaza scheme,” said Mr Moran.

Knight Frank is the office agent for the scheme. Financial services group Amtrust has also signed on for another of the adjoining Central Plaza buildings, on 6/8 College Green.

WeWork’s London-based head of real estate Patrick Nelson said its deal for One Central Plaza proved its commitment to Dublin. He said its recent entry into the Dublin market has been successful. “We’ve seen interest from a mix of both start-ups and large corporate companies taking space with us.”

Others offering shared office space in Dublin include the not-for-profit Fumbally Exchange, CoCreate in the city centre, and the Coworkinn in Sandyford.