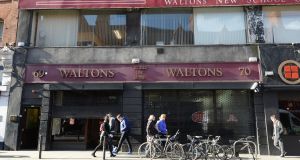 Sostrene Grene, already running six stores in the Republic, is expected to pay a rent of about €260,000 for the double-fronted city centre shop, which has a ground floor extending to 565sq m (6,077sq ft).

Ben Pearson of letting agent Agar said the owner of the building had received a particularly strong level of inquiries from the food and beverage industry, but opted for Sostrene Grene because he wanted to protect the fast-diminishing retail sector on the street.

Waltons decided last February not to renew its 25-year lease, opting instead to move the business to its existing branch at Blanchardstown Retail Park.

South Great George’s Street was originally noted for its fashion stores led by Pims and Cassidys but over the past 20 years has been taken over primarily by cafes, restaurants and bars.

Only recently Dunnes Stores opted to lease part of its spacious home furnishings store to Five Guys for a new restaurant.

Sostrene Grene (which translates as the “Green Sisters”) was founded in Denmark in 1973 and now has more than 160 stores in Denmark and across France, Germany, Spain, Iceland, Japan and the Nordic states.

The South Great George’s Street store will, like the other Irish outlets, be run as a joint venture between the Danish company and Irish-American couple Niall and Heather Lawlor.